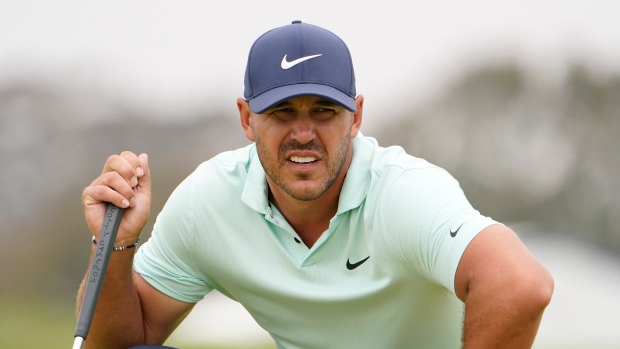 After Xander Schauffele won the gold medal in thrilling fashion in Olympic men's golf this past weekend in Japan, the American and the world's best travel to Memphis for the WGC-FedEx St. Jude Invitational.

This exclusive field features just 66 players from 15 different countries, and is comprised of 48 of the top 50 golfers in the world.

The two players who aren't teeing it up are world No. 1 Jon Rahm of Spain, who wasn't able to compete in the Olympics due to a positive COVID-19 test, and Christiaan Bezuidenhout of South Africa.

This will be the third time the World Golf Championships event will be contested at TPC Southwind, although this track was a PGA Tour mainstay for several years when it wasn't as prestigious a championship.

In 2018, Dustin Johnson holed out for eagle on the 72nd hole to win the FedEx St. Jude Classic, and since then it has been a WGC tournament.

The FedEx Cup playoffs are right around the corner, with The Northern Trust kicking things off in two weeks.

He's followed by Collin Morikawa, who is fresh off his Open Championship title and then narrowly missed out on a bronze medal at the Olympics.

Just one Canadian is teeing it up – Corey Conners, who sports +4500 odds to claim the trophy.

He comes off two solid starts, with a T-15 at the Open Championship and then 13th at the Olympics.

Here's our first look at the field for the WGC-FedEx St. Jude Invitational.

Often wagering on the tournament favourite ends up being fools gold, particularly when their odds are super short in the +600 range.

Despite being the favourite this week, Koepka still has decent enough value at +1000 against a smaller field and he excels at this layout.

He also seems to have recovered from his nagging knee injury, posting top-six results in four of the last five events.

In the last 24 rounds, he's at or near the top in several key 'strokes gained' categories.

The four-time major champ is first in SG: off-the-tee, second in both total SG and putting, third tee-to-green, ball striking and short game and fifth in SG: approach.

Very rarely is it the prudent play to wager on the betting favourite, but in this instance it's close to a sure thing that he'll at least contend come Sunday evening, given his fantastic results at this course.

Past Five Winners at TPC Southwind

A golfer that may not win many popularity contests is Patrick Reed, but his play more than silences his critics.

Reed has an incredible ability to block out the noise and focus on the task at hand in order to win big championships, which is exactly what he's done in his career.

Of his nine PGA Tour victories, two have been WGC events. He also has a Masters green jacket and won this year at Torrey Pines amid controversy over a possible rules violation.

In his last seven tournaments, he's been good – not great, with all but one of them being inside the top-35.

For the campaign, the enigmatic Reed is eighth in total strokes gained and putting.

He's also had some success around this venue, recording fifth place and T-12 showings.

At +4000 odds to win outright, it's hard to find a player capable of nabbing the trophy with more tempting odds.

We've been banging the drum for Joaquin Niemann to break out and go from 22-year-old Chilean sensation to bona fide superstar and prolific winner.

That has nearly been the case three times this season, with Niemann coming close to notching his second PGA Tour title.

The last came just three starts ago, where he went bogey-free for all 72 holes at the Rocket Mortgage Classic.

A costly untimely bogey on the first playoff hole ended his chances.

He had a very solid Olympics last week, posting a top-10 result.

Niemann is ninth in scoring average and 10th in birdies on the season, and the youngster is only scratching the surface of his immense talents.

He still sports palatable odds at +4500 to win outright, and would yield a solid return in the top 5/10/20 markets.