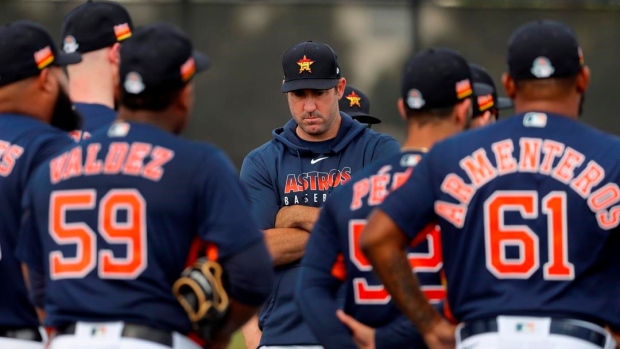 A new baseball season is quickly approaching with the first spring training games being played this weekend, but the Houston Astros sign-stealing scandal remains a highly discussed topic around the league.

Several high-profile players, like Mike Trout, Aaron Judge and Giancarlo Stanton, have spoken out about the matter, especially after MLB commissioner Robert Manfred handed down what many players thought was a “weak” punishment for Houston’s cheating during their championship-winning 2017 season.

"I wasn't a fan of the punishment, I thought that was a little weak for a player-driven scheme"

- Aaron Judge on the Astros pic.twitter.com/8WZHWjBnVo

The Astros were fined $5 million and lost four high draft picks. Manager A.J. Hinch and GM Jeff Luhnow were suspended by the league and later fired by the team, but no players were punished. With tensions remaining high due to the severity of the scandal and players unhappy with the lack of punishment, will opposing players take matters into their own hands this season?

Well, you can wager on that.

The betting site BookMaker.eu has released odds on who will be the first Astros player to be hit by a pitch this year, with star third baseman Alex Bregman – who hit the walk-off single that won Game 5 of the 2017 World Series – the favourite at 3/1.

Second baseman Jose Altuve, who was named American League MVP in 2017 and also received the AL Silver Slugger award that season, is at 7/2 odds to be the first Astros player beaned.

Outfielder George Springer also has 7/2 odds. Similar to Bregman and Altuve, Springer played a major role for the Astros in the 2017 postseason. He hit a homer and doubled in Game 7 of the World Series to secure the Astros’ win, and was awarded with the World Series MVP award.

Shortstop Carlos Correa is the other Astros player to be singled out, having 4/1 odds of being the first to be hit.