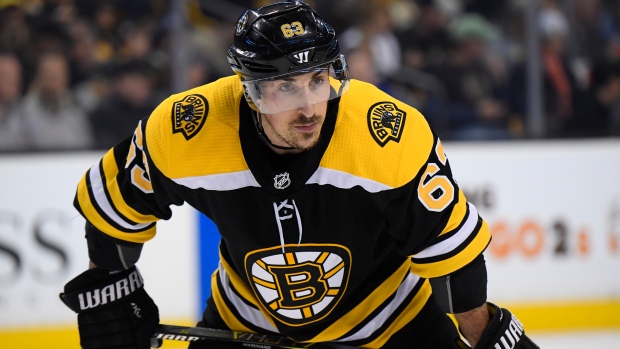 NHL Commissioner Gary Bettman said Wednesday that Boston Bruins forward Brad Marchand received a warning from the NHL's department of player safety for punching an unsuspecting Scott Harrington in the back of the head and a repeat of the offence could result in a suspension.

The incident occurred late in the third period of the Columbus Blue Jackets 2-1 victory over the Boston Bruins in Game 3 on Tuesday after Sergei Bobrovsky froze the puck in the Columbus end. As officials broke up an ensuing scrum, Marchand appeared to punch Harrington while the Blue Jackets defenceman was on his knees.

“That play should have been penalized," Bettman said, per TSN Senior Correspondent Rick Westhead. "Sometimes things are missed on the ice. Our officials must have the most difficult job in sports."

If Marchand repeats the action though, Bettman added "he should look forward to a suspension."

Harrington, who was not injured by Marchand, called the jab a "hockey play" on Wednesday, but added he would've liked to see a penalty called.

“I know there wasn’t a suspension or anything," Harrington said, per NBC Boston. "It is what it is and we’re moving on”

Marchand, meanwhile, said the media's reaction to punch will serve as a deterrent moving forward.

“(Jake DeBrusk) was taking punches from a few guys in front of the net, so it was just a reaction to that,” Marchand said Wednesday. “It is what it is. There’s a lot of media attention in the playoffs and they jump on to things and hold onto them. It creates a stir.

“I’m not overly concerned about what’s said in the media or what fans say. It was an unnecessary play, but games go on and you worry about the next [game]. Fans all have their opinions and they’re entitled to it because they pay a lot of money to watch us play the game. So, thank you [to them]. You just roll with it. Having to talk about it today is probably a reason why I wouldn’t do it again, but stuff like this happens in hockey.”

Marchand has been held without a point through three games against the Blue Jackets, but made headlines in Game 1 when he stepped on Cam Atkinson's stick, breaking it prior to a faceoff. He also took a shot at ex-teammate Riley Nash after Game 1.

The 30-year-old was incident-free with player safety this season and posted 36 goals and a career-high 100 points in 79 games. He has four goals and nine points in 10 playoff games.

Marchand, however, has a long history of facing discipline and has forfeited $879,522 in salary since 2011 in fines and suspensions. His last suspension came on Jan. 23 of last year, when he received a five-game ban for elbowing Marcus Johansson in the head.

Game 4 of the first-round series will take place Thursday night.