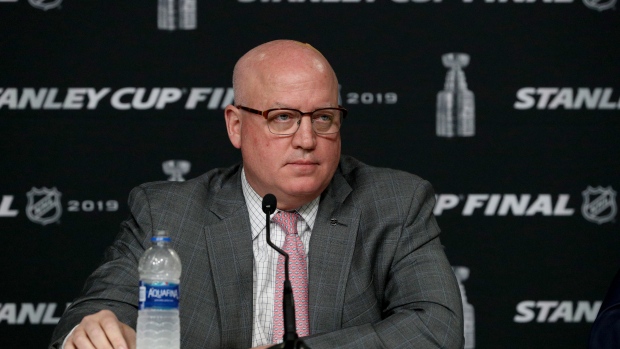 NHL deputy commissioner Bill Daly told the Two Man Advantage podcast with Pierre LeBrun and Scott Burnside that the league continues to target an 82-game season for 2020-21, though a start date of Dec. 1 seems less likely at the moment.

Daly added the focus remains on getting through the remainder of the Stanley Cup Playoffs and the off-season, with the NHL Draft scheduled virtually for Oct. 6 and 7.

When asked by LeBrun what he anticipates will change between now and when the NHL is ready to begin their 2020-21 season, Daly said everything remains up in the air but is optimistic about the league finding a solution.

“I think there are always ways to play,” Daly said. “I think what you choose to do in terms of playing is really the more complicated question. How do you put on a season? We remain certainly intent on trying to have an 82-game regular season. Whether that’s possible or not is yet to be seen.”

When asked if getting fans back in arenas, at least in some capacity, is more of a goal than playing a full 82-game campaign, Daly had this to say.

“No, I think the priorities remain the same. Look, we’d still love to be able to play an 82-game season,” he said. “Again, I can’t sit here and guarantee that will be the case. But that continues to be an objective, that continues to be a goal. Being able to play in arenas that have some fan presence if not a full building, again it’s an objective, it’s a priority, it’s a goal."

When asked if the NHL was willing to go deep into next summer if needed, Daly reiterated he didn’t think that would be a problem given how ice surfaces held up in NHL cities during team training camps as well as the Edmonton and Toronto hub cities during the league’s return to play this summer.

“If anything was proven this summer, it’s that having three games a day in these facilities in the heart of August wasn’t problematic. A lot of people thought we’d be playing on wet surfaces, but that didn’t transpire. The ice held up, the ice quality is generally good. So, playing in the summer is not a problem for us.”

But he added he doesn’t want summer hockey to be a thing forever.

“Having said that, do I want to get back on a normal calendar, a normal cycle, a normal hockey cycle? Particularly with the other elements of the hockey worlds that we interact with … we’re going to try to go back to our normal cycle as soon as the world events permit.”

The NHL originally paused its 2019-20 season on March 12 because of the COVID-19 pandemic but jumped back into a 24-team return on Aug. 1. The Stanley Cup is currently set to be awarded no later than Oct. 4.