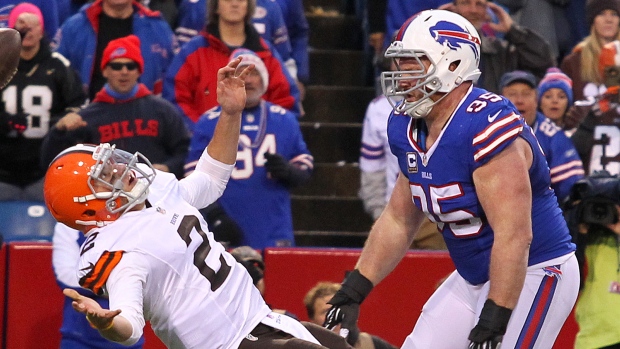 ORCHARD PARK, N.Y. - The season is officially over for Buffalo Bills defensive tackle Kyle Williams, and the team signed three players on Tuesday to shore up its injury-depleted defence.

In a long-anticipated move, Williams was placed on season-ending injured reserve because of a left knee injury that has forced him to miss the past four games.

The moves address a defence that is expected to be down several regulars on Sunday, when Buffalo (5-6) hosts Houston (6-5). Both teams are still in the AFC playoff picture.

Starting linebacker Nigel Bradham is not expected to play after he sprained his right ankle in a 30-22 loss at Kansas City on Sunday. Defensive lineman Alex Carrington, who was filling in for Kyle Williams, sustained a season-ending left quadriceps injury.

And the status of defensive end Mario Williams is uncertain after he didn't play against Kansas City because of a foot injury.

Barnes is listed at 6-foot-7 and 364 pounds and spent the past two seasons with the Jets, where he played under coach Rex Ryan. That makes Barnes familiar with Buffalo's defensive system under Ryan, who took over in January.

Edwards is listed at 6-foot-4 and 275 pounds. He was selected by Tennessee in the fifth round of the 2013 draft before being traded to Dallas.

The Bills also have some uncertainties on offence.

Backup running back Karlos Williams was spotted in the locker room on Tuesday with his left shoulder immobilized after he was hurt against the Chiefs. Starting right guard John Miller is expected to miss his second game with a high left ankle sprain.