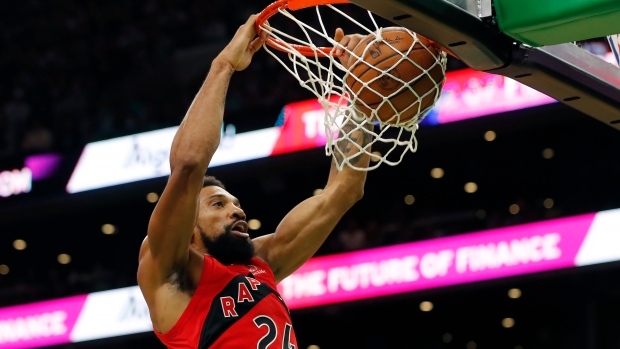 TORONTO – The Raptors have an unusual history with stat sheets.

Kyle Lowry used to love them, which is somewhat ironic given that his value would almost always transcend the numbers he put up. On the bench, he was always hyperaware of how many assists or rebounds he needed for a triple-double. He was also on top of what his teammates needed to hit a milestone.

After games, you would often see him reviewing a box score at his locker. He knew his stats and you could bet he also knew everybody else’s.

During a shooting slump, Rudy Gay once outlawed them from inside Toronto’s locker room. The great stat sheet ban of 2013 didn’t last very long, but then again, neither did Gay’s tenure.

Khem Birch isn’t about to go that far, but you won’t catch him eyeing his numbers either.

“I don’t look at box scores ever,” said the Raptors centre and Montreal native.

At his core, Birch is not the type of player that tends to worry about how many shots he gets off or the amount of points he scores. He prides himself on doing the dirty work that most guys don’t want to do, those little things that often go overlooked or underappreciated by the casual observer.

That wasn’t always the case, as Birch also noted. As somebody who’s spent most of his five-year NBA career playing for his next contract, he hasn’t had that luxury until recently. But after turning an impressive late-season audition with the Raptors into a three-year, $20 million deal over the summer, Birch feels more comfortable being himself on the court.

The security of a guaranteed salary has freed him up to focus on the things he values most, even if they don’t align with what some other players or some fans prioritize.

“Ever since I’ve been playing basketball, I never cared about stats,” said the 29-year-old big man. “I used to watch the Detroit Pistons and how they played defence, and in high school people told me they loved playing with me because I was so unselfish. I remember being ranked high in high school and I never averaged a lot of points or anything. The way I’ve played has got me to where I am right now, so I would never change it.”

“I hate contract years just because you have to do things outside your element. Last year I had to score and do all the other stuff that I don’t like to do. I just like to win.”

A big off-season raise has also brought out a different side of Gary Trent Jr. Also acquired late last season – the centrepiece of the deadline day trade that sent Norman Powell to Portland – Trent signed a three-year, $54 million contract with Toronto over the summer. And, like Birch, his fingerprints have been all over the team’s surprising early-season success and current five-game winning streak.

If you’re looking at the numbers you might be underwhelmed. Birch averaged 11.9 points in 19 games with the Raptors last season, more than doubling his mark of 4.7 points per contest in nearly four seasons with Orlando. Through nine games this season, he’s scoring just 6.6 points, as he continues to get his conditioning back after missing most of training camp with COVID. Meanwhile, Trent is averaging 15.1 points, down from 16.2 in 17 games with the club last year, and is shooting just 39 per cent.

Throw the numbers away, as Birch would say, and you’ll see that both players are playing the best basketball of their careers. Maybe the scoring or the efficiency is down, but their impact is way up.

With his reads, quick hands and on-ball pressure, Trent’s defence has been a pleasant early-season surprise. The 22-year-old guard leads the NBA in steals and deflections. He’s made big plays on the defensive end, including one that sealed a win against Orlando last week, when he poked the ball away from Cole Anthony on the game’s final possession.

When Nick Nurse met with Trent in Vegas over the summer, shortly after he signed his new deal, Toronto’s head coach challenged him to become a better defender. That seemed like the next step in his development as a player, and while Nurse knew he had the ability to make that jump, he’s admittedly surprised it’s happened this quickly.

“He was super open-minded and receptive to it,” Nurse said. “And obviously it’s showing because of what he’s doing on the defensive end right now.”

“Gary is one of the best players I have ever seen – like, no offence – not play defence and then all of a sudden become a good defender,” Birch joked. “It’s crazy. I swear I’ve never seen that before.”

But Birch gets what a new contract can do for a player’s confidence level. His defence has also taken another step forward this season, he’s been active on the boards – especially on the offensive glass, where he’s averaging a career-best 3.1 rebounds per game – and he’s developing great chemistry with Fred VanVleet in the pick and roll.

He continues to come off the bench behind the struggling Precious Achiuwa, and that appears to be the plan for the foreseeable future, even though he’s started the second half in each of the last two games. Still, what matters most is who’s on the floor at the end of games, and Birch has been an early fixture in Nurse’s crunch time lineups, and with good reason. The Raptors have outscored opponents by 46 points – the highest mark on the team – in Birch’s 208 minutes, though he’s not measuring his production in that, or any other, stat.

“When you are in a contract year I feel you have to have good numbers and that’s what I hate about contract years,” Birch said. “I’m not the type of player who puts up numbers, I just like to win. Unfortunately, I had to do that last year to get this [contract] but now I’m happy because I can help my team win.”

At the time, some wondered whether those deals the Raptors gave to Birch and Trent this past summer would be worth it, and that’s fair. With Birch, they were extrapolating from a 19-game sample size more so than they were paying for what they saw in Orlando. With a young player like Trent, these contracts are always a calculated risk, a bet on what you think they can grow into two or three years down the road.

It’s still early, but so far, both players are living up to their new deals.