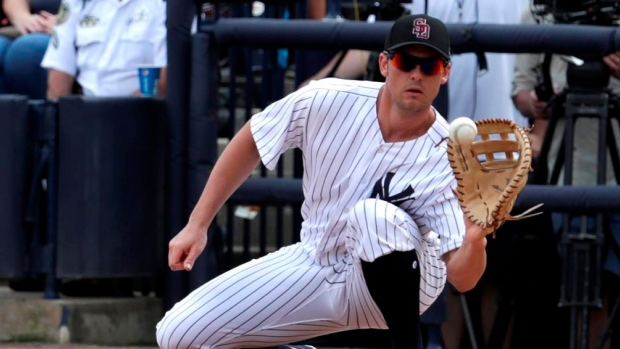 JUPITER, Fla. — New York manager Aaron Boone sent Greg Bird back to the Yankees complex in Tampa on Thursday after the first baseman developed stiffness in the elbow hit by a pitch a day earlier.

"He probably could have played," Boone said. "It was me saying, 'Go home.'"

Bird took Wade Miley's offering off his right elbow during the first inning of Wednesday's loss to Houston but remained in the game. In the midst of a two-game spring road trip, the Yankees spent the night in the West Palm Beach area before playing St. Louis in Jupiter on Thursday.

Bird hit 11 homers in 46 games during his 2015 debut season. Various injuries and ineffectiveness prevented Bird from playing more than 82 games in any year since then.

Throughout the spring he's battled Luke Voit for the starting first baseman job, hitting .333 with three homers in 51 plate appearances. Voit has four homers while hitting .316 in Grapefruit League play.

"I don't know that anyone's won or lost it," Boone said. "Both guys are good players in my eyes. At a certain point we may be up against making a very difficult decision."

The Yankees will have more time than originally expected to make that decision. With centre fielder Aaron Hicks expected to open the season on the injured list with a back injury, there's room for both Bird and Voit on the opening day roster.

Back in Tampa, pitcher Luis Severino played catch on consecutive days for the first time since being shut down because of rotator cuff inflammation, throwing 50 times off flat ground.

"It went well," Boone said. "It felt even better because I think he was more comfortable now, second day playing catch, letting it go. But no pain, so another positive day for him."

Severino will not throw on Friday and Boone is uncertain as to when the Yankees' ace will progress to throwing off a mound.

The righty will begin the season on the injured list, with the Yankees asking him to complete a full spring training program before returning to the majors.

New York also expects to get its first look at newly signed pitcher Gio Gonzalez in game action before leaving Florida on Sunday, but Boone isn't certain whether it will be in a Grapefruit League or minor league game.

"Right now I think we're tentatively counting on him pitching Saturday somewhere and we'll start kind of evaluating where he is," Boone said.