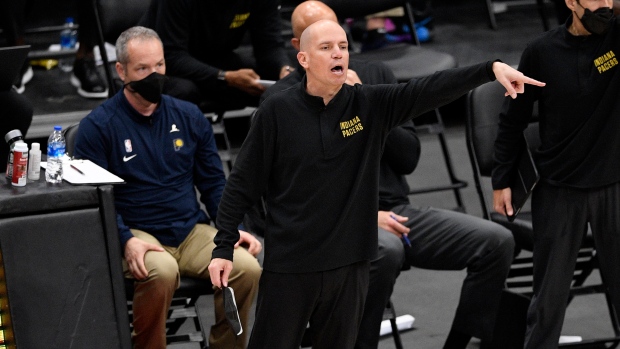 Canada Basketball announced Tuesday that Bjorkgren had been named associate head coach and will lead Canada during November and February windows of the FIBA Basketball World Cup 2023 Americas qualifiers.

Mitchell, a Toronto native, will assume head coach duties for the FIBA AmeriCup 2022 in Brazil next summer. Mitchell will also be a lead assistant coach on Bjorkgren's staff during the November and February qualifying games.

"Both Nate and Nathaniel are tremendous coaches within the senior men's national team program and to have them committed to coach our team during upcoming FIBA competitions is incredibly valuable to us in pursuit of our long-term goals," said Rowan Barrett, the GM and executive vice-president of men's high performance.

Barrett said because of scheduling conflicts with the NBA, the windows, and other FIBA competitions, it was vital to have both coaches involved with the program year-round.

"The Toronto Raptors continue to be a tremendous partner of Canada Basketball in helping us grow the game of basketball," Barrett said.

Both Bjorkgren and Mitchell were assistant coaches on Nurse's senior men's team staff for both the FIBA Basketball World Cup 2019 and the FIBA Olympic qualifying tournament in Victoria this past summer.

"Consistency is critical for the sustained success of this team and that extends beyond the players to our coaching staff as well," Nurse said. "Having Nate and Nathaniel lead our team during the upcoming FIBA competitions will be not only another important step in their development as coaches but also the continuity and culture we are committed to building as a program."

Bjorkgren was head coach of the Indiana Pacers last season and previously served as an assistant coach (2018-20) and advanced scout (2017-18) for the Toronto Raptors after spending two seasons as player development coordinator and assistant coach of the Phoenix Suns from 2015-17.

Starting in November, 80 national teams will play games across six qualifying windows to secure their place among the 30 teams who will join hosts Japan and the Philippines in the 32-team World Cup in 2023.

In the Americas region, 16 teams will face off over two rounds with the three best teams from each group, and the fourth-placed team qualifying for the FIBA Basketball 2023 World Cup.

Canada is in Group C for the Americas Qualifiers and will face Dominican Republic, US Virgin Islands and Bahamas.