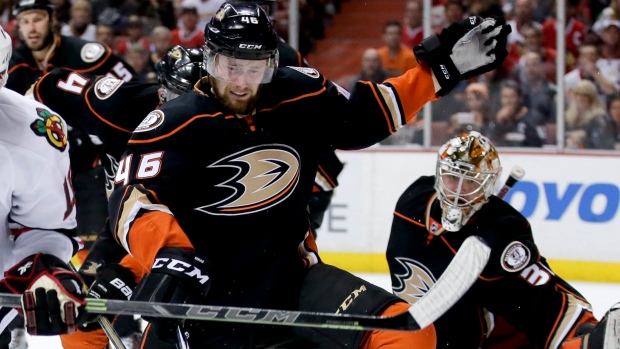 The Chicago Blackhawks acquired forward Jiri Sekac from the Anaheim Ducks in exchange for forward Ryan Garbutt on Thursday.

The one-for-one swap provides a change of scenery for two players who have struggled to produce points this season and saw their minutes drop. It is also salary cap neutral for both teams, with Sekac earning $925,000 and the Ducks only shouldering $900,000 for Garbutt, since the Dallas Stars still retain half of Garbutt's salary.

Sekac, 23, was originally acquired by Anaheim less than one year ago (Feb. 24, 2015) in a straight-up trade for Devante Smith-Pelly. He finished last season with a combined 23 points in 69 games split between Montreal and Anaheim.

This year, though, Sekac has struggled along with the rest of the Ducks to score, posting one goal and two assists in 22 games.

Garbutt, 30, came to Chicago last summer in the deal for Patrick Sharp. After breaking 25 points in each of the last two seasons, Garbutt has managed just two goals and four assists for the defending Stanley Cup champs in 43 contests.

For Chicago, the big picture view of last summer’s trade is now Scuderi and Sekac for Sharp and defensive prospect Stephen Johns.

The one benefit for Chicago in Thursday’s trade is that Sekac is nearly seven years younger than Garbutt. It’s rare anymore in today’s NHL to see a 30-year-old traded for a 23-year-old.