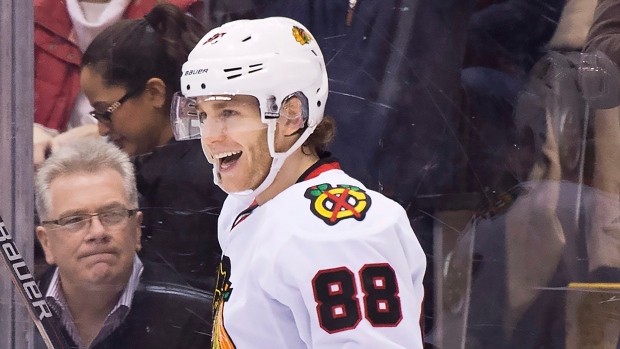 TORONTO - Patrick Kane and penalties were the undoing of the Toronto Maple Leafs.

Kane had a hat trick as the Chicago Blackhawks earned their 10th straight win with a 4-1 victory in Toronto on Friday night. Kane, who added an assist for a four-point night, now has 28 goals on the season — best in the NHL.

The Maple Leafs gave up six penalties — including four in the second period — with Chicago earning two power-play goals.

"I think that's one of their skills: the power play," said Toronto defenceman Morgan Rielly. "I think they're really good at it. They use each other well. They really make the ice big and create opportunities.

"Their D got pucks to the net and created scoring chances and that's one of their strengths."

Artemi Panarin scored on the power play and assisted on two of Kane's goals for the Blackhawks (30-13-4). Scott Darling made 28 saves to earn the win in net for Chicago while Corey Crawford took the night off after a 2-1 win in Montreal the night before.

The Blackhawks' win puts Chicago in first in the Central Division, a point ahead of the Dallas Stars, who played in Anaheim later Friday night.

Kane scored his first goal of the night midway through the second period just as a Toronto penalty ended, putting away a cross-ice pass from Duncan Keith, who was down low after Chicago had briefly been stripped of the puck in the dying seconds of its power play.

Kane struck again with 2:47 left in the second. He one-timed the puck past a diving Reimer from almost an identical spot as his first goal. This goal was on the power play as Matt Hunwick served a high-sticking penalty.

Hunwick's penalty was one of four that Toronto took in the second, including a high-sticking penalty Nazem Kadri took with a second left in the period. Roman Polak then earned a cross-checking penalty 12 seconds into the third.

Panarin made the most of Chicago's ensuing two-man advantage, giving the Blackhawks a 3-0 lead just 21 seconds into the third.

Rielly ended Darling's shutout bid 3:47 into the third, wiring a wrist shot from the face-off circle over the Chicago goaltender's shoulder to cut the Blackhawks lead to 3-1.

Brad Boyes almost added a goal for Toronto near the midway point of the third, firing a one-timer at close range at Darling, who made a stunning save. Boyes could've collected his own rebound for a second shot but mishandled the puck.

Kane completed his hat trick with 2:12 left in regulation by putting the puck into an empty net. He's had two three-goal games in the post-season but never in the regular season.

"I think I've had a few two-goal games but I guess it just never really happened," said Kane. "I wouldn't trade the two in the playoffs for anything in the regular season but it's nice to get the first one.”

It looked as though Andrew Shaw had opened scoring for Chicago with 7:53 left in the first period, banging in his own rebound after putting a shot on net. However, Toronto coach Mike Babcock challenged the play and it was over-ruled because Marian Hossa was a stride ahead of Shaw on the play, making it offside.

Notes: The game was played before an announced crowd of 20,049 at Air Canada Centre. ... Toronto left-winger James van Riemsdyk was a scratch as he continues to heal a fractured foot. ... Defenceman Frank Corrado and left-winger Rich Clune were healthy scratches for the Maple Leafs.