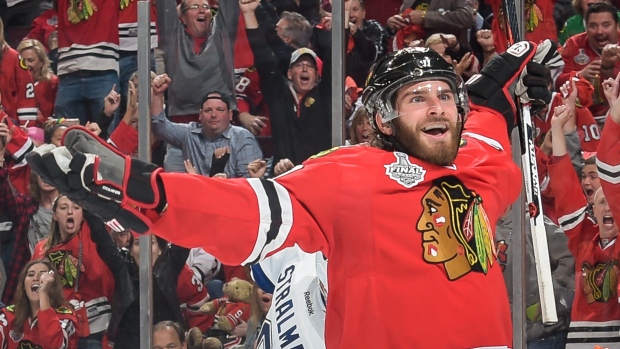 The Chicago Blackhawks have traded left wing Brandon Saad along with Michael Paliotta and Alex Broadhurst to the Columbus Blue Jackets in exchange for forwards Artem Anisimov, Marko Dano, Jeremy Morin and Corey Tropp and a fourth-round selection in the 2016 NHL Draft.

The American winger is coming off his entry-level contract with the Blackhawks worth an average annual value of $894,000. He was believed to be a target for an offer sheet from rival clubs once the free agency period opens.

Saad has extensive post-season experience for a player in just his third year in the league. In 67 post-season games with the Hawks he has scored 15 goals and 19 assists, earning two Stanley Cup rings with Chicago.

He was originally selected in the second round (43rd overall) of the 2011 NHL Entry Draft by the Blackhawks. He has scored 52 goals and 74 assists in 208 games with the club.

Dano, 20, was a first round-selection (27th overall) of the Blue Jackets at the 2013 NHL Draft. He appeared in 35 games with the Blue Jackets, scoring eight goals and 13 assists. It was the Slovakian centre's first season in the NHL.

Anisimov, 27, scored seven goals and 20 assists in 52 games with the Blue Jackets in 2014-15. The Russian centre was selected in the second round (54th overall) of the 2006 NHL Entry Draft by the New York Rangers.

The Blue Jackets acquired him in the trade that sent Marian Gaborik to the Rangers in 2013. In 412 career games with the two clubs he has scored 86 goals and 106 assists.

Morin returns to the Blackhawks organization after only half a year. Chicago acquired him in 2010 in the deal that sent Dustin Byfuglien to the Atlanta Thrashers but shipped him to Columbus last December in exchange for defenceman Tim Erixon.

The 24-year-old winger scored two goals and four assists in 43 combined games between the Hawks and Jackets in 2014-15. He has scored 10 goals and 12 assists in 82 career games with the two clubs. The Thrashers originally selected him in the second round (45th overall) of the 2009 NHL Entry Draft.

Paliotta played one game with the Hawks last season after finishing his fourth year at the University of Vermont. The defenceman was a third-round pick (70th overall) in the 2011 NHL Entry Draft.