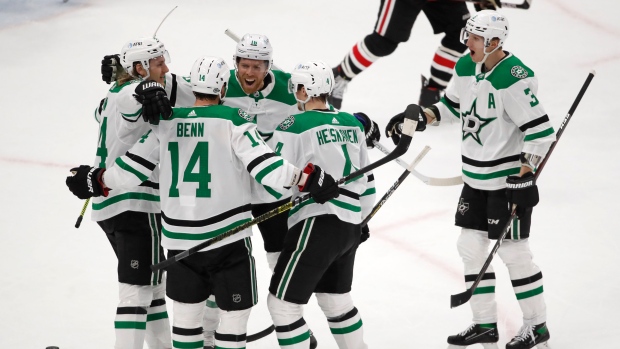 CHICAGO — Blake Comeau scored twice, Roope Hintz had a goal and three assists and the Dallas Stars beat the Chicago Blackhawks 5-1 on Thursday to end a two-game slide.

Jason Robertson and Miro Heiskanen also scored to help Dallas pull closer in the battle for the fourth place and the final playoff spot in the Central Division. The Stars (14-14-10) have 38 points, but have played just 38 games because a COVID-19 outbreak delayed their start this season.

Anton Khudobin made 38 saves for the game — and some tough ones in the first period when Chicago came out buzzing and took 16 shots. Coach Rick Bowness asked his players to adjust their forechecking and defensive coverage during the first intermission, and the injury-depleted Stars took over the rest of the way.

“They all bought in and we played better after that,” Bowness said. “Tonight things went our way.”

Especially for Comeau and Hintz, a strong, 6-foot-3 Finn who was dominant in this one despite skating with a lingering lower-body injury.

“Give him 100% marks for being gutty,” Bowness said. “He's one of the best two-way forwards in the game and he's just going to get better.”

Comeau’s goals were just his second and third in 33 games. The 35-year-old forward skated on a line that not only shut down Chicago's top trio of Patrick Kane, Alex DeBrincat and Kirby, but sparked Dallas' attack.

“It's a good feeling for sure,” Comeau said. “It's been a bit of a grind for me offensively to find the back of the net this season.”

Dominik Kubalik connected for the Blackhawks (18-18-5), who fell four points behind fourth-place Nashville as the Predators pounded Detroit. Chicago made a trade with Florida earlier Thursday to bolster its roster for a playoff push, but had to settle for a split in a two-game set with Dallas.

“The power plays were a big difference in the game,” Chicago coach Jeremy Colliton said. “They got two and we got zero.”

So were turnovers and coverage mistakes that Dallas jumped on.

“There were some individual mistakes that gave them some golden chances,” Colliton said. “We need more to compete against a team like them when they are as determined as they were.”

Chicago added forward Brett Connolly, defenceman Riley Stillman and the rights to elite prospect Henrik Borgstrom from the Panthers earlier in the day. But the error-prone Blackhawks were outskated in the evening and lost for the 11th time in their last 16.

He popped in a rebound after Lankinen slid across the crease and made a sensational save on Jamie Benn’s one-timer off Joe Pavelski’s pass.

Kubalik tied it at 1 with 5:55 left in the first. Newly re-acquired forward Vinnie Hinostroza dug the puck from a scrum in the right corner, then centred to Kubalik who had slipped to the front of the net.

Robertson put Dallas back in front 2-1 at 1:15 of the second during a 4-on-4. Dallas cashed in moments after Nikita Zadorov’s turnover to Esa Lindell in the Chicago zone as Hintz fed Robertson in the crease.

Heiskanen’s power-play goal with 5:58 left in the second on a screened shot from the top of the slot upped it to 3-1.

Comeau scored on a breakaway 1:45 later to put Dallas in charge, 4-1. Sprung by Andrew Cogliano’s pass, Comeau skated in alone all the way from centre ice after Chicago defenceman Duncan Keith fell.

Set up by Hintz, Comeau scored again from point-blank just 50 seconds in the third to complete the scoring.

DEAL FOR NOW … AND LATER

The Blackhawks sought to give their playoff push a boost by acquiring Connolly and Stillman from the Florida Panthers on Thursday for forward Lucas Wallmark and defenceman Lucas Carlsson.

The Blackhawks also got the rights to Borgstrom and Florida’s seventh-round pick in the 2021 NHL draft.

President of Hockey Operations and GM Stan Bowman hopes the 28-year-old Connolly and 23-year-old Stillman will join the team this weekend in Columbus.

The 6-foot-3 Connolly has just two goals and two assists in 21 games with Florida this season, but scored 19 goals last year and had a career-high 22 goals and 24 assists with Washington in 2018-19.

Stillman is known for a physical style. Borgstrom, Florida’s first-round pick and 23rd overall in 2016, is playing this season in Finland.

Bowness returned to the bench after a false positive COVID-19 test caused him to miss the third period of a game Sunday at Carolina and Tuesday’s 4-2 loss in Chicago. Bowness, 66 and the oldest NHL coach, has been vaccinated.

Blackhawks: At Columbus on Saturday for the first of a two-game set.