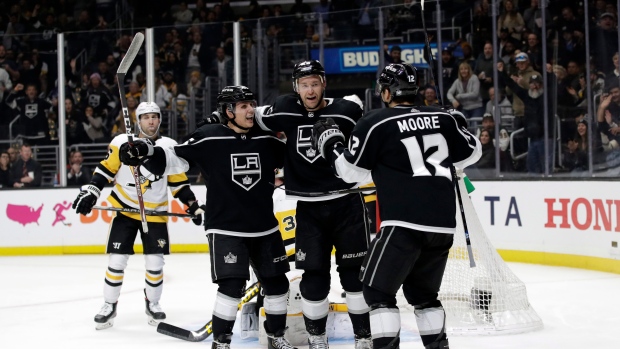 LOS ANGELES — Blake Lizotte had a power-play goal and an assist, Cal Petersen made 36 saves and the Los Angeles Kings spoiled the Penguins debuts of Patrick Marleau and two more deadline acquisitions with a 2-1 victory over Pittsburgh on Wednesday night.

Lizotte posted his second career multi-point game and Trevor Lewis also scored as the last-place Kings hung on for their fourth win in seven games.

Tristan Jarry stopped 20 shots in Pittsburgh's fourth consecutive loss. Bryan Rust scored with 13:18 to play, but the Penguins couldn't get the equalizer past Petersen, who was strong in his seventh career victory.

Petersen is getting his first extended NHL playing time for the rest of the season after the Kings traded Jack Campbell to Toronto.

“He’s played the way he played tonight almost all year in the American League,” Kings coach Todd McLellan said. “We think he can do what he did tonight on a consistent basis moving forward. He’s very calm, cool, collected in the crease. There’s not a lot of garbage laying around. The guys feel confident with him in there, and I just think he’s going to get better as he gets stronger and goes through the league once or twice."

Evgeni Malkin got an assist on Rust's goal while playing in his 900th career game, but the Penguins opened a road swing against California's three teams with their fourth straight regulation loss. That matches the Pens' total regulation defeats in their previous 22 games since Christmas.

“We know that points are important, and we want to be playing well this time of year," captain Sidney Crosby said. "You don’t want to drop four in a row, but it’s the reality we face. I feel like we probably deserved a little better the last few games, but you don’t get points for that, so we've got to find ways to win games.”

Marleau played 19 shifts in his debut for the Penguins, who acquired the 40-year-old forward on Monday from the Kings' rivals in San Jose. Even in his 1,716th career game, Marleau acknowledged feeling some nerves.

“It’s good to shut the brain off as soon as you get on the ice," Marleau said. “I was racing before that. But yeah, felt pretty good on the ice tonight, and the guys are all easy to play with, so it makes it easy.”

Conor Sheary and Evan Rodrigues also made their debuts for Pittsburgh after the club's series of moves to bolster their playoff push.

“Those guys were great,” Rust said of his new teammates. "I think you can see what made them successful players in the league. Obviously a lot of us are familiar with Conor, and even playing against Patty in the playoffs, I think we know how good he’s been for so long. And Rodrigues came in, you could see how hard he works and his wheels and just the team game.”

Lizotte put the Kings ahead just 2:34 when he redirected Sean Walker's long blast during a power play for his fifth goal. Lizotte's goal was his first in 23 games since Dec. 17.

Lewis then scored with 32 seconds left in the second period, swooping down the wing onto a pass from Lizotte and scoring on his own rebound for his fourth goal of the season.

The 33-year-old Kings stalwart and two-time Stanley Cup champion was a topic of trade rumours throughout the month, but wasn't moved while GM Rob Blake shook up his struggling roster by dealing Tyler Toffoli, Alec Martinez, Derek Forbort, Kyle Clifford and Campbell.

Pittsburgh finally scored when Malkin's centring pass was tipped home for Rust for his 24th goal.

NOTES: Penguins F Jared McCann was scratched with an upper-body injury. He had played in 52 consecutive games since Oct. 17. ... Kings F Jeff Carter missed his fourth straight game with a lower-body injury. ... Marleau's NHL career, which began in 1997, is even older than Staples Center. He played four games for the Sharks against the Kings at the Great Western Forum before Staples opened in 1999. Marleau will return to San Jose to face the Sharks on Saturday night. ... Crosby had a goal disallowed by video review in the first period. His deflected shot caught the butt of Petersen's stick, bounced crazily on the goal line and never fully crossed it. ... Pittsburgh-area native Michael Keaton attended the game. Will Ferrell and Linkin Park's Mike Shinoda also were in the crowd.