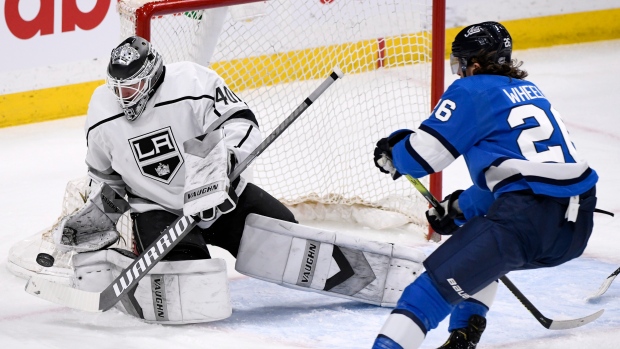 WINNIPEG — Blake Wheeler was glad to be back playing on a line with Mark Scheifele — and it showed.

The captain scored twice and added an assist in his 700th game with the Jets franchise, and Winnipeg defeated the Los Angeles Kings 6-3 on Tuesday.

“You know I love playing with Scheif, and I think the feeling’s mutual. It’s like riding a bike,” said Wheeler, who last lined up with the alternate captain in early November after veteran centre Bryan Little was injured.

Jets coach Paul Maurice moved Wheeler from centring the second line to the wing with Scheifele and Nikolaj Ehlers in the second period. Ehlers had a goal and two assists and Scheifele added a pair of assists.

“It’s something that you know you like, you’ve seen it work so well, but we’ve had our challenges with pieces of lines,” Maurice said of reuniting Wheeler and Scheifele.

Patrik Laine scored a goal into an empty net and added one assist. Jansen Harkins and Mason Appleton also had goals. Jack Roslovic contributed a pair of assists.

Dustin Brown scored a pair of goals and Martin Frk notched the other one for the Kings (21-34-5), who were coming off two straight wins. Anze Kopitar and Matt Roy each added a pair of assists.

Calvin Petersen stopped 29 of the 34 shots he faced for Los Angeles in his third game this season.

It was the Kings' first game without forward Tyler Toffoli, who was traded to Vancouver Monday. The team also scratched defenceman Alec Martinez for the Winnipeg game, reportedly because another trade was in the works.

“Just where we are at the (trade) deadline, and as we go forward we want to keep certain people healthy,” McLellan replied.

Brown said the team responded well after the trade and scratch.

“Our first period was our best period,” he said. “It kind of faded. Each period kind of got worse for us as a group. We started well but just couldn’t maintain.”

While it might be tough to play in the week leading up to the trade deadline, it's a part of the business and a “learning experience,” Brown said.

“We get paid to play hockey,” he said. “There are going to be ups and downs and distractions. But it is your job as a player to be ready to play regardless of the situation. I think emotionally it can drain you, but you’ve got to be able to focus.”

Earlier on Tuesday, the Jets acquired defenceman Dylan DeMelo from the Senators. He remained in Ottawa until Winnipeg begins a four-game road trip against the Senators Thursday.

“You're fighting for a playoff spot, trying to add some pieces that fit in and we did that,” Ehlers said. “We're excited to have him in. Hopefully, he's able to jump right in.”

The Jets are one point out of playoff spot in the NHL Western Conference.

The Kings led 1-0 after the first period and Winnipeg held a 3-1 lead after the second.

Brown scored 35 seconds into the game off a rebound.

Winnipeg responded with a trio of goals in the second from Harkins, Appleton and Wheeler.

Harkins got his second goal of the season after Laine passed him the puck during a 2-on-1 and he beat Petersen with a low shot at 13:13.

Appleton made it 2-1 at 17:05 when Roslovic dropped him a pass and he fired the puck between Petersen's pads.

Wheeler recorded his 19th goal of the season 88 seconds later on a 2-on-1 with Scheifele.

Los Angeles made it 3-2 at 1:21 of the third when Adrian Kempe shot the puck wide of the net, Frk picked it up behind Hellebuyck and wrapped around for the goal.

Ehlers also finished off a 2-on-1 with Scheifele to regain the two-goal lead at 5:49.

Brown made it 4-3 with 4:44 left in the third when he tipped in a point shot from Roy. Kopitar picked up his second assist, giving him six assists in a three-game point streak.

Laine scored into an empty net at 17:43 and Wheeler tipped in a Neal Pionk point shot to finish the scoring at 18:31.