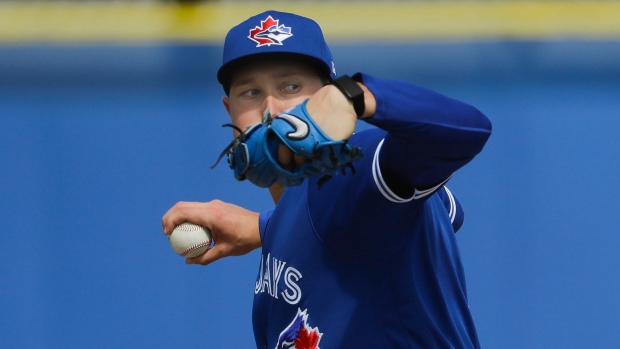 But despite being one of the best pitching prospects in all of baseball, the 23-year-old future Toronto Blue Jays rotation staple is not yet a finished product.

Pearson has been trying to change that this winter, working hard on a curveball that he currently calls his “fourth-best pitch.”

By now, everyone knows about the fastball.

It regularly touches triple digits, sitting in the upper-90s each and every time out.

The slider is another weapon, a putaway pitch that minor leaguers have been swinging and missing on since the Jays stole him with the 28th pick in the 2017 MLB Draft as a late-rising arm out of Central Florida Community College in Ocala, Fla.​

Like most young pitchers, the changeup is still a work in progress, but it’s the development of a curveball that was Pearson’s focus this winter.

He took that work into his first live BP session Friday morning on the backfields of the Bobby Mattick Training Centre, facing Vladimir Guerrero Jr., Randal Grichuk, Teoscar Hernandez and veteran infielder Ruben Tejada, a non-roster invitee who has nine major-league seasons under his belt.

“I didn’t know who (I was going to face) until yesterday and I saw I was facing Vladdy, Grichuk, Teoscar, and Ruben Tejada,” Pearson said afterwards. “I was like, ‘You know what? This is is going to be a good test. That’s pretty much the starting lineup right there, all those guys.’

“I was messing around with Vladdy earlier, ‘I’m going to throw you a first pitch fastball, man,’ and he was saying ‘OK, OK.’ ”

Hernandez described facing Pearson with three words: “That was nasty.”

When Pearson’s on the mound, the superlatives fly. But they’re warranted. He looks like the real deal.

“He looked great,” Walker said. “Obviously, it’s a live BP so it’s a situation where the hitters aren’t really locked in yet, but the stuff came out and it was electric. Power to his fastball, the slider was sharp, he was extremely aggressive and we didn’t get many good swings off of him.”

With just three Triple-A starts to his credit and a Blue Jays rotation re-stocked with veterans in front of him, it’s no secret that Pearson will head back to Buffalo to start the year.

Even Pearson knows it, and he mentioned liking the sharp temperature drop Friday in Dunedin, saying he wants to get used to Buffalo-in-April conditions.

But he still wants to make an impression, and he’ll get a chance to do that Tuesday when manager Charlie Montoyo hands him the ball for his first Grapefruit League start against the New York Yankees at renovated TD Ballpark.

“It’s pretty awesome,” said Pearson, a native of Odessa, Fla., just northwest of Tampa. “First big league spring training and I get a start, so it’s very special. My parents are pretty pumped about it, being right down the road, so they’ll definitely be there.”

Pearson will be on a strict pitch count and will only throw an inning or two, but he’ll get a chance to test out that curveball in a game setting against big leaguers.

“My slider’s always been way ahead of my curveball but I’m trying to level it out and make all my pitches pretty elite,” Pearson said. “I’m really working on it.

The big winner this winter was Walker.

Not only did the front office get him Hyun-Jin Ryu, Tanner Roark and some much needed rotation depth, he also finally has Pearson has a legitimate option and one quick phone call away.

Nate Pearson Watch could begin as soon as the calendar flips to May.

When he does arrive, Walker will have a potential top-of-the-rotation starter with a four-pitch repertoire.

“He’s primarily fastball/slider, but when he’s elevating that fastball it’d be nice to have that big hook that he can either drop in for a strike early in the count or finish a guy off with it,” Walker said. “It’s just another added pitch to the mix. The changeup is still a little bit of a work in progress at times, he pushes it, but the life on the fastball is exceptional.”

Gil Kim, the club’s director of player development, is eager to see how the full repertoire plays.

“His best pitch is that power fastball, and both the slider and the changeup have developed into pretty solid pitches for him, as well,” Kim said. “The curveball, that is the pitch that he’s probably put the most emphasis on this off-season, but it shows a lot of promise, too. It’s a pitch that has late downward action and we’ve seen some of the best curveballs out of his hand recently after his work in the off-season.

“Anytime you add another pitch to the mix, especially when you have a few good ones, it just makes you a more dangerous pitcher.”

They know they could have something special on their hands.

“He’s one of the most committed workers we have,” Kim said. “He’s been like that since the day he was drafted. His off-seasons are super focused and detailed as far as doing everything he needs to do to get prepared for the season. It’s not a shock to see that he’s feeling strong, looking good, and sharp.”