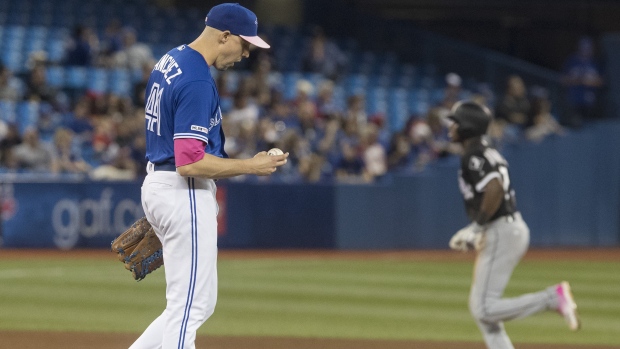 TORONTO — Charlie Montoyo has no intention of moving one of his struggling starting pitchers into the bullpen.

The Blue Jays manager is keen on giving right-hander Aaron Sanchez more time to figure things out instead.

"I talked to him (Monday) in the dugout and he feels positive that he can turn this thing around," Montoyo said Tuesday before Toronto opened a three-game home series against the Boston Red Sox.

The 27-year-old, who's dealt with finger issues on his throwing hand over the past couple seasons, is experiencing another down year despite being relatively healthy through 2019.

Sanchez (3-11) has lasted four innings or less in three of his last four starts and hasn't won a decision since April 27, prompting speculation that he might fare better in the bullpen — where he worked during the second half of the 2015 season and into Toronto's playoff run that year.

"He feels healthy," Montoyo said when asked what's keeping Sanchez positive this season. "He knows he's not commanding his pitches so he knows if he does (command his pitches) he's going to be OK.

"He knows he's pitching behind in the count and all that, we all see it. In the big leagues when you do that you're going to get hit, or not pitch five innings or whatever."

Sanchez led the American League in earned-run average (3.00) in 2016 but blisters and finger nail issues hampered him in each of the last two seasons.

Montoyo said Sanchez has been working with pitching coach Pete Walker, trying to fix the velocity issue with a slight mechanical adjustment.