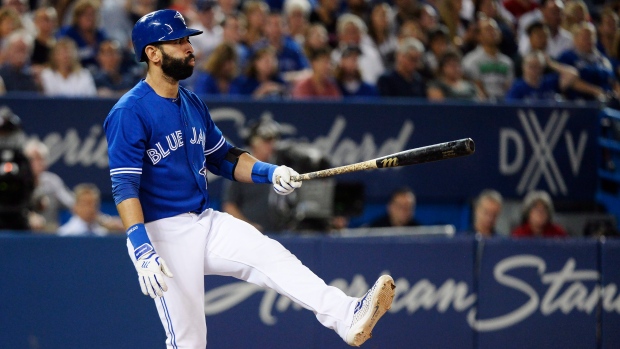 Sitting in the clubhouse Thursday afternoon, Russell Martin barely raised his voice above a whisper.

“What are we waiting for?” the veteran catcher of 12 seasons and 1,515 games said quietly.

The subject was protective netting in ballparks around baseball.

A subject that usually isn’t talked about unless something happens, as it did Wednesday night in the Bronx when a young girl was hospitalized after being hit in the face by a 105-mph foul ball off the bat of New York Yankees third baseman Todd Frazier.

“Balls are going 105 mph into the stands, and bats and everything,” said Martin, who had an up-close view of Kansas City Royals catcher Salvador Perez’s broken barrel hurtling through the air and into the Rogers Centre stands above the third base dugout Tuesday night.

While no one was hurt in Toronto, players in New York were visibly disturbed when they realized what had happened.

“It was terrible,” Frazier told the Los Angeles Times. “I was shaken up a little bit. I hope she is all right. It is something that I wish never happened. It was tough. Tough to watch. Tough to be a part of, to be honest.”

Each individual Major League Baseball team is responsible for how far the protective netting extends down the base lines.

They can all do what they want as long as they’re satisfying the minimum recommendation of covering all seats within 70 feet of home plate.

Thanks to the expansive foul ground at Rogers Centre, the Blue Jays easily meet the requirements, but a team spokesperson confirmed Thursday that they will be looking into more protective netting this off-season, something MLB commissioner Rob Manfred will undoubtedly be addressing league-wide once again this winter.

In the winter of 2015, MLB released an in-depth study that recommended all teams should lengthen safety netting, but, behind the scenes, liability issues linger.

“The events at yesterday’s game involving a young girl were extremely upsetting for everyone in our game,” Manfred said Thursday. “Over the past few seasons, MLB has worked with our clubs to expand the amount of netting in our ballparks.

“In light of yesterday's event, we will redouble our efforts on this important issue.”

The Cincinnati Reds, San Diego Padres and Seattle Mariners all announced plans to extend protective netting within 24 hours of the incident in New York.

In the NHL, it took 13-year-old Brittanie Cecil to be struck and killed by a puck in Columbus for safety netting to be installed in every single arena.

It’s human nature to resist change, and even that one was met with some pushback: How are spectators paying good money going to be able to see through the netting?

Now, it would be crazy to think of an NHL arena without what seems like an obvious safety measure.

One day it will be in the same for baseball.

“To be honest with you, I’m surprised there’s not more injuries,” Jays manager John Gibbons said. “There always seems to be some close calls. I mean, there was a broken bat that went in the stands here the other night. If that catches somebody wrong, it could pierce them.

“I would be in favour of (more netting). No doubt.”

Blue Jays GM Ross Atkins has been to countless baseball games at every single level of the sport, giving him more than a few anecdotal reasons to educate his own family on the dangers of being a spectator.

“When you do this for a living, as you know, you see a lot of unfortunate incidents that occur,” Atkins said. “When I go to a game with my children, I ask them to be extremely cautious and have to make my wife constantly aware of the risk and the dangers that exist, regardless of netting.

“I think Major League Baseball is doing everything they can to take the security up a notch, but the most effective thing we can do is heighten awareness and make people aware of how dangerous it is to be watching a baseball game. There’s only so much netting that can occur.”​