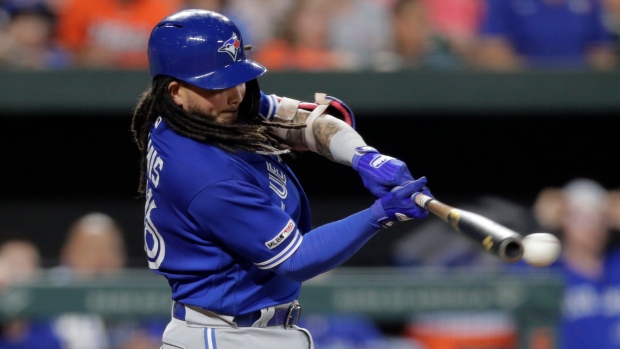 TORONTO — Another veteran has been purged from the Toronto Blue Jays roster with the goal of finding more playing time for potential pieces to the 2020 puzzle.

Placed on waivers over the weekend by the club, shortstop Freddy Galvis was scooped up by the Cincinnati Reds on Monday, leaving Bo Bichette and Cavan Biggio as the clear everyday duo up the middle, if they weren’t already.

Seen as a stopgap solution when he was signed to a one-year deal with a club option for the 2020 season back in late January, Galvis did all that was asked of him in his short time in a Blue Jays uniform. However, GM Ross Atkins couldn’t find a taker for the 29-year-old at the July 31 trade deadline and it left manager Charlie Montoyo trying to find ways to get the veteran into the lineup over the past two weeks.

Had there been a waiver trade deadline like in years past, Galvis absolutely would’ve been traded this month, but MLB smartly did away with that convoluted process and we’re seeing the ramifications.

Teams will learn lessons from this year and we could see more depth moves next July as GMs learn to navigate the new, sensible system.

Now, Montoyo can use the DH spot to give more at-bats to players like Brandon Drury, Billy McKinney, Derek Fisher, potentially Rowdy Tellez and Jonathan Davis, as well as a couple of other options that could arrive when rosters expand Sept. 1.

The move will also save the Blue Jays what’s remaining on Galvis’ $4 million 2019 salary, plus the $1 million buyout they were expected to use on him this off-season instead of picking up a $5.5 million option.

It wasn’t exactly a mutual decision, but it was close, and the Reds are hanging around on the fringes of the National League wild-card race.

“We were just very open with him, very honest about it,” Atkins said. “And, obviously, with Bo showing up and playing a lot of shortstop, we were having a lot of discussions with Freddy about what that meant for him. When he was DHing, playing some second, and Bo was DHing, we had more discussions about it.

“Understanding the landscape based on discussions we had at the deadline with other teams and what opportunities could potentially be there for him, (we) ultimately decided that it was a good thing for Bo to be playing shortstop every day and not DHing every fourth or fifth. And the good thing for Freddy, and Freddy felt the same. It was really just about being open.”

Galvis put up decent numbers during his four-plus months with the Jays.

He hit 18 home runs in 473 plate appearances, displayed his trademark glovework at short, and provided a veteran presence, especially for the Latin contingent.

But he also was what he has been his entire career, sporting just a .299 on-base percentage and a below average 93 wRC+.

It was a smart plug-and-play signing for the rebuilding Jays, but it was the right time to move on and there was no trade value to speak of.

“I think a lot of the mentoring’s happened,” Atkins said when asked how they replace the clubhouse leadership. “I think a lot of these guys have already learned and grown a great deal, and I think it’ll continue to happen amongst the group that’s in there.

“I also feel that Freddy’s earned the right to play every day and he’s going to a place where he’s going to be playing on a regular basis.”

There’s no doubt he will be missed in the clubhouse, and Galvis made sure a number of the young guys were aware of what was going on.

“Definitely once I found out about the news I was very sad,” said left fielder Lourdes Gurriel Jr., who’s currently on the injured list with a left quad strain. “He taught me a lot. Not just to me, to the rest of the guys. I will always carry that with me.

“He called me and he told me what was going on. We talked about it a long time. The only good thing about this, he lives in Miami, works out in Miami so we’ll be seeing each other a lot.”

After suffering a Grade 1 left quad strain trying to beat out a play at first base last Thursday against the Yankees, Gurriel is improving but he’s still unsure how much time he’ll need on the injured list.

“Always (when) something happens the worst things go through your head, through your mind, but as soon as I got up I felt like it wasn’t that bad so from that point on I knew it was nothing major so hopefully I’ll be back soon,” Gurriel said through an interpreter Monday afternoon.

Gurriel continues to get treatment and he’s already started working out in the gym so it’s not expected to be an overly long IL stint for the 25-year-old Cuban.

Scorching hot prior to the All-Star break, Gurriel has cooled off since, slashing .232/.283/.394 with three home runs in 107 plate appearances in the second half.

Ken Giles continues to battle a mysterious right elbow issue, but the Jays don’t see a need for a trip to the 10-day IL.

Unavailable since serving up a two-run homer last Wednesday to make a road win against the Tampa Bay Rays a little more interesting than it needed to be, Montoyo said Giles was ready to go in a save situation Monday night in the series opener against the Texas Rangers.

The ensuing blowout meant Giles wouldn’t be needed, but it’s at least a good sign he was available, even if the first-year skipper said he won’t be pitching on back-to-back days anytime soon.

“I think it came down to where we were taking a big step forward and half a step back,” Atkins said. “Our bullpen has been so good that we’ve been able to do that. Derek Law stepped up, (Justin) Shafer stepped up, (Jason) Adams stepped up, adding Neil Ramirez. Our bullpen really has really been exceptional after all the subtractions. Because of that we’ve been able to go slowly and conservatively with Ken. His performance, he gave up the home run in Tampa, but his stuff was very good. We feel like he’s ready to go (Monday) and that makes us a better team, if we’re able to keep him on our roster.”

Atkins said he isn’t concerned with the elbow issue lingering into the winter and becoming a problem once again next spring.​