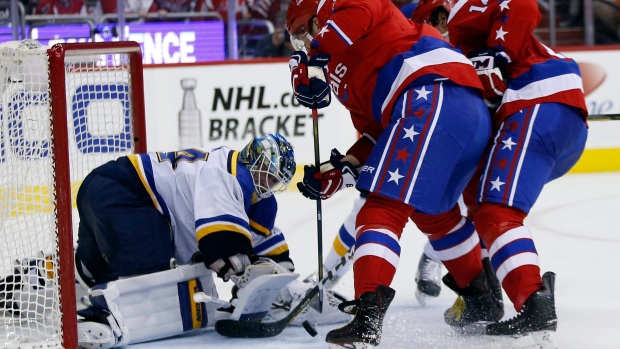 WASHINGTON - Jake Allen watched from the bench as fellow goaltender Brian Elliott put together three consecutive shutouts for the St. Louis Blues. Jealousy didn't set in, but Allen wanted his chance, too.

He got it Saturday night and kept the streak going. Allen stopped all 32 shots he faced, and the Blues beat the NHL-leading Washington Capitals 4-0 for their franchise-record fourth shutout in a row.

St. Louis is the 11th team to post four consecutive shutouts, a testament to team defence but also the goaltending of Elliott and Allen.

"It can be tough a little bit because (Allen has) been watching lately, and obviously (Elliott) has been playing unbelievable," Blues forward Paul Stastny said. "It's that internal competition that sometimes can be bad for you and sometimes can be good. These guys have found a way to make it competitive on a good standpoint that benefits the team."

The Blues left Elliott back in St. Louis to rest after he shut out the Vancouver Canucks on Friday. Coach Ken Hitchcock said Elliott will be back in net Tuesday against the Colorado Avalanche, who are fighting to keep their playoff hopes alive.

Thanks to stellar goaltending, the Blues have already clinched a playoff spot and can now set their sights on the Central Division and the top seed in the Western Conference. The victory against the Capitals improved St. Louis to 10-2 in its past 12 games and allowed the team to keep pace with the Dallas Stars atop the division.

"We've had a weird year with injuries and missing bodies, we really haven't had a full team all year and still don't," said Allen, who bounced back from allowing five goals in his last start March 16. "It's just a credit to everyone in this locker room to get to first in the division with the year we've had."

Kyle Brodziak, Colton Parayko, Vladimir Tarasenko and Patrik Berglund scored for the Blues against Capitals backup Philipp Grubauer, who stopped 25 shots. Brodziak's goal was his second in as many nights after his wife gave birth to the couple's third child Thursday, and Tarasenko scored his team-leading 35th.

Washington missed its first chance to clinch the Presidents' Trophy and home-ice advantage throughout the playoffs. The Capitals needed just a point to wrap that up but will have to wait until Monday when they host the Columbus Blue Jackets.

Coach Barry Trotz didn't think the score was indicative of how tight the game was most of the night.

"We tried to press to break the goose egg and they countered and ended up scoring," Trotz said, lamenting two games without a 5-on-5 goal. "I thought Jake Allen for them was really good tonight. But it should've been a little closer than it was, probably."

Allen made a handful of memorable saves, stopping Marcus Johansson in the second period sliding to his right and then denying NHL leading goal-scorer Alex Ovechkin from point-blank range in the third. Allen credited teammates for limiting chances to the outside.

But Hitchcock praised Allen for being the Blues' best penalty killer and for bailing them out after turnovers. Even if skaters were helping clear rebounds, Allen followed Elliott's lead in stopping initial shots and not cracking.

"The goalies have been just outstanding," Hitchcock said. "They are the story of the team this year, and they're keeping us afloat again."

"When your goalie's hot, the confidence breathes through the rest of the team," Brodziak said. "We're feeling that right now."

NOTES: T.J. Oshie, who played seven seasons with the Blues before a trade last summer, missed his second game for the Capitals because of an illness. ... Blues forward Troy Brouwer, traded for Oshie, received a standing ovation after a tribute video honouring his four seasons with the Capitals. ... Washington was shut out for the first time since Nov. 10.