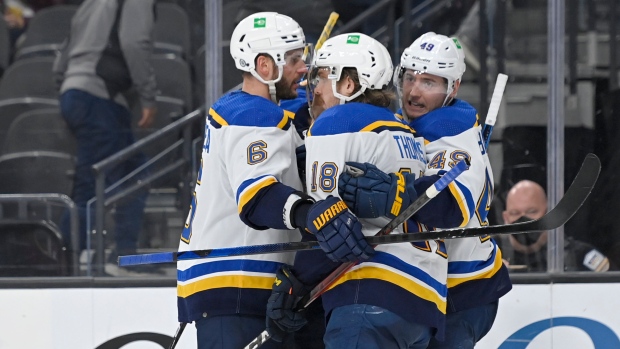 Jordan Binnington made 42 saves, and Brandon Saad and Ivan Barbashev added goals for the Blues. St. Louis won all three games on its season-opening trip, also beating Colorado 5-3 and Arizona 7-4.

William Karlsson opened the scoring for the Golden Knights, and Robin Lehner made 35 saves.

On the tiebreaking goal, former Blues captain Alex Pietrangelo turned the puck over in the neutral zone with a blind pass, giving the Blues a 3-on-0 rush. Taking a pass from Brayden Schenn, Jordan Kyrou fed Tarasenko for a one-timer past Lehner with 10:11 to play.

The Golden Knights didn’t get their first shot on goal until nearly seven minutes into the game, then took the lead on Karlsson's goal. After Reilly Smith drew him to one side, Binnington slid across the crease to deny Karlsson’s initial one-timer, but he punched home his own rebound.

The Blues eventually solved Lehner in the second period with their continued pressure in the offensive zone. Ryan O’Reilly dropped the puck off for former Knight David Perron, whose initial shot deflected off Vegas defenseman Shea Theodore to set up Saad as he skated in. Saad, who signed with St. Louis as a free agent in July, buried his first goal as a member of the Blues.

Barbashev had an empty-net goal.