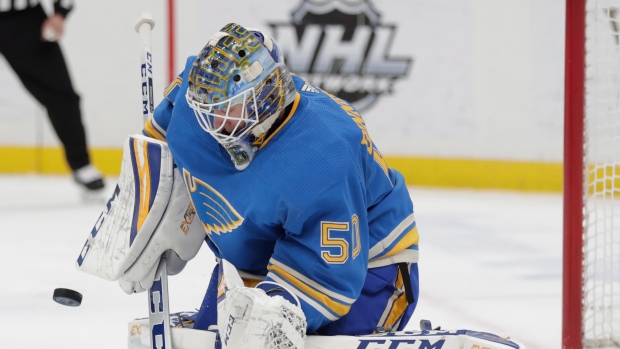 The tweets, from 2013 and 2014, were dug up by California-based reporter Paul Gackle. The Winnipeg Free Press reported on the tweets in a story on Tuesday night.

Binnington addressed the subject at Wednesday's morning skate before the Blues faced the Winnipeg Jets in Game 1 of their NHL first-round playoff series.

"It was a while ago when I was a teenager and it was a little sarcasm, joking around," said Binnington, a 25-year-old native of Richmond Hill, Ont.

"I was a teenager and that's what life's about. You live and learn and you grow as a human so, you know, I'm just here to play a couple hockey games."

“Obviously, we don't condone public comments that could be perceived as insensitive. But based on what we've been made aware of to this point, we don't believe there is any basis to specifically address or even comment on 5-year old social media posts from a Player who wasn't even part of the National Hockey League at the time," said Daly.

In the first tweet, Binnington wrote, "I was thinking. when people who wear the burkas are at the airport how is the security able to see if that's them in their passport... Srsly."

In the second tweet, Binnington wrote, "Also If you're underage & nervous of getting into a bar, throw the damn burka on. no way the bouncer will get into that awkward questioning."

In the third tweet, Binnington wrote, "Ya taxi man I'd probably rather listen to the radio than listen to you talk on the phone in another language."