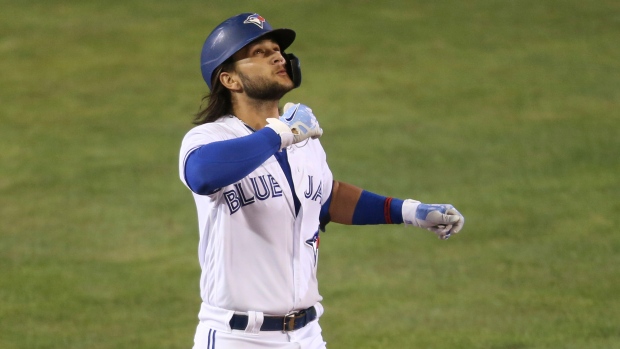 TORONTO — Over the course of the 13-plus months that Bo Bichette has been a big leaguer, even the Toronto Blue Jays’ coaching staff has learned a lot about him.

A year ago, manager Charlie Montoyo initially viewed him as a table-setter with gap power and speed, quickly installing him in the leadoff spot when he arrived in the big leagues.

Bichette has been doubling down on that pop this summer, slugging .672 in his first 14 games, before a freak knee injury stole a month and sidelined him until this weekend.

A week before the injury, on Aug. 7, Montoyo tweaked the top of his batting order in an effort to maximize the skillsets of Bichette and Cavan Biggio, a change that is likely here to stay.

Biggio, noted for his sky-high walk rate and ability to get on base, was pushed into the leadoff spot, and Bichette and his growing power slid down a spot into the No. 2 hole.

“The way Bo swings the bat now, he’s become probably our best hitter, we could say that,” Montoyo said. “So that’s why you want to move him down in the lineup, second, third, because he can have more people on base.”

Holding a .904 OPS in the leadoff spot, Bichette is already batting .438 with four homers in just eight games hitting second, while Biggio’s on-base percentage has jumped from .363 hitting in the two-hole (56 games) to .388 batting leadoff (39 games).

By a wide margin, Biggio leads the Blue Jays in pitches seen per plate appearance, making opposing pitchers throw an average of 4.14 pitches every time he steps to the plate.

That’s good for 36th in baseball.

Teoscar Hernandez (3.99, 62nd) is the only other Jays hitter above the league average of 3.96 pitches seen per plate appearance.

Bichette, meanwhile, has been more aggressive so far in this season’s small sample size, seeing 3.76 pitches per at-bat, compared to 4.19 last season when he was leading off.

That fundamental difference between the two is quite evident.

Whether it’s first or second, neither player has ever shown much of a preference.

Despite Bichette missing 27 games with a freak right knee sprain that he suffered while warming up on deck in an eventual 3-2 loss to the Tampa Bay Rays on Aug. 15, the Jays still sat 13th in runs scored heading into Sunday’s series finale against the New York Mets, averaging 4.8 per game, including 5.7 at home inside Sahlen Field.

The Jays managed to somehow go 17-10 without their best hitter.

Given a quiet one month timeline when the injury occurred, Bichette beat that by four or five days, but he almost attempted to return even sooner when he watched Hernandez and Rowdy Tellez, two players who helped carry the offence in his absence, land on the injured list.

“When I saw them going down, not going to lie to you, I had conversations with my parents and asked them, ‘Hey, should I rush it? Should I rush it?’” Bichette said. “I was already ahead of schedule so they weren’t too excited with me thinking that way.”

The Jays, of course, played it safe with their franchise shortstop.

With 14 games remaining after Monday’s off-day, the Jays control their own destiny when it comes to securing one of the eight postseason spots in the American League.

But nothing has changed for Bichette and his teammates.

“I’ve never been part of (a playoff race) so I’ll go out there and play as hard as I can, just like those guys have been every single day,” Bichette said. “Just like I’ve been saying all along, we’re just going to go out there and play hard and see what happens and control what we can control. It should be fun.

“Nothing changes. Like I’ve told you guys since the beginning, our plan is to go out there and play as hard as we can. We can’t control the mistakes, we can’t control what happens, but we can control how hard we play and how prepared we are.”​