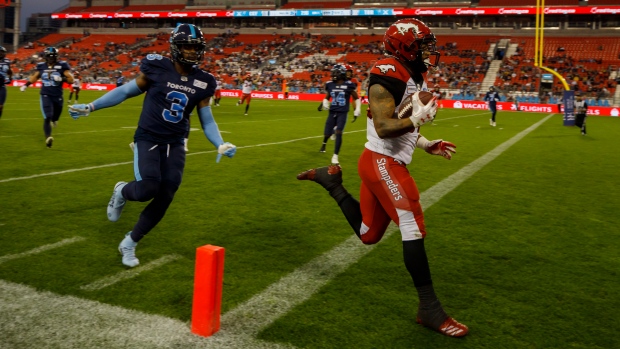 TORONTO — Bo Levi Mitchell and the Calgary Stampeders continued their mastery of the Toronto Argonauts on Friday night.

Mitchell was 33-of-48 passing for 346 yards and a TD as Calgary defeated Toronto 23-16 for its 12th straight regular-season victory over the Argos (2-10). The Stampeders (9-4) also earned their seventh consecutive road victory here.

Mitchell, who threw two interceptions, improved his career regular-season record to 11-0 versus Toronto. But the Argos upset Calgary 27-24 in the 2017 Grey Cup game.

"It will end one day," Mitchell said of his regular-season streak versus Toronto. "I've been blessed to be around this team.

"In the last eight years I've had some pretty amazing teams. It's not like I was perfect. I didn't have my stuff today again . . . but it's hard to win in the CFL."

Predictably, Rogers was Mitchell's favourite target with eight catches for 119 yards. But Mitchell gave the game ball to Hunchak, who had five receptions for 52 yards.

"I thought they (youngsters) showed a lot of vet stuff," Mitchell said. "Eric obviously made some huge, clutch plays for us and provided that vet status.

"But I gave Hunch the game ball because I felt like the guy just played like a vet out there."

It wasn't a clean offensive performance as Calgary had three turnovers and could only manage a second-half field goal. So when Toronto scored 10 fourth-quarter points, it pulled to within 23-16 with 1:56 to play.

James Franklin found Derel Walker on a 35-yard TD strike at 13:04 after Tyler Crapigna booted a 35-yard field goal at 10:40 before a season-low BMO Field gathering of 9,819. Calgary took over at its 25-yard line with 1:51 left and was able to run out the clock and drop the Argos to 2-4 over their last six games after starting the season 0-6.

"Right now. the guys have no clue on history," Calgary head coach Dave Dickenson said. "They don't even understand whether we've had success here or not because it's such a young, fresh team.

"But that's also fun because they're building something . . . there's a lot of two steps forward and a couple steps back but I do feel like the guys really are playing hard and the effort is intense."

Toronto sacked Mitchell once, a first since he returned from injury. But Calgary's defence registered six, including two each by Toronto native Derek Wiggan and Mike Rose.

"I thought our D-line was the best of the game as far as any of the groups," Dickenson said. "I just thought they just kept pressuring and pressuring them.

"As a team we know we have to be better, we have to learn from it. If we don't we won't get as far as we want to. It's another win, though. Check it off, let's keep moving forward."

Calgary converted two Toronto turnovers (interception, downs) into 10 points (TD, field goal). The Stampeders came into the game leading the CFL in interceptions (19) and points off turnovers (93) and tied with Winnipeg for most turnovers forced (35).

Franklin replaced starter McLeod Bethel-Thompson in the third and marched the Argos 64 yards on six plays, setting up Crapigna's 36-yard field goal at 11:04 to cut Calgary's lead to 20-6. Franklin finished 12-of-16 passing for 147 yards and a TD.

Bethel-Thompson was 12-of-18 passing for just 86 yards with an interception after throwing 12 TD passes and just two interceptions in his previous five starts. However, Toronto's offence — which had averaged 418 net yards in the previous five games — struggled with consistency on a night when the Toronto Maple Leafs hosted the Buffalo Sabres in NHL exhibition action.

Paredes gave Calgary a 20-3 half-time lead with a 17-yard field goal at 14:31 of the second. It came after Toronto mysteriously gambled (unsuccessfully) on third-and-five, giving the Stampeders the ball at the Argos' 53-yard line.

And yet, Toronto played it safe on third-and-goal from the Calgary two-yard line, settling for Crapigna's nine-yard field goal at 8:13 to cut the Stamps' advantage to 17-3. Kennan Gilchrist's interception put the Argos at the Stampeders' nine-yard line.

"It's all about trying to get the math in our favour," said Toronto head coach Corey Chamblin. "We were down 17-0, we got the three.

"If you're down two scores, you have a chance to win. Down three (scores) and you're not in it."

Argos running back James Wilder Jr., whose 18-yard catch put Toronto at the Calgary two-yard line, was frustrated with Chamblin's call for the field goal.

"Yeah, I was pretty frustrated with that."

Chamblin explained he opted for the third-and-five gamble in an attempt to bring Toronto to within one score at the half.

Despite Franklin's performance, Chamblin was non-commital about who'll start next weekend when Toronto hosts the Saskatchewan Roughriders.

"I've had a lot of expectations this year and none of them have come true," Franklin said. "So I'll stop expecting things."