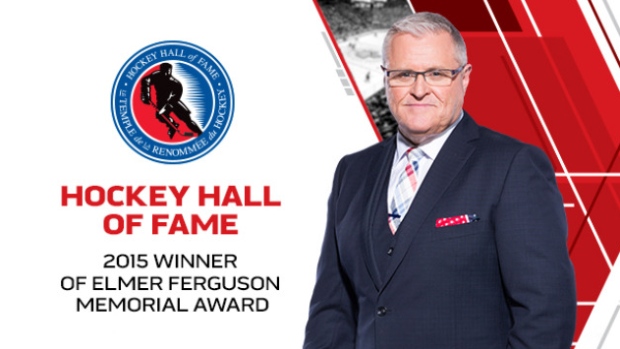 The TSN Hockey Insider is this year's winner of the Elmer Ferguson Memorial Award, as selected by the Professional Hockey Writers Association (PHWA) and recognized by the Hockey Hall of Fame. The award goes annually to a member of the hockey writing profession "whose words have brought honour to journalism and hockey."

McKenzie's words have done just that over a career spanning more than 35 years.

"It's hard to imagine a more deserving winner of the Elmer Ferguson Award than Bob McKenzie," said Scott Burnside, president of the PHWA.

"Bob is a pioneer in the multi-platform world," said TSN Sr. Vice-President Mark Milliere. "He has written the playbook on how a journalist combines the written and spoken word, television and digital. In doing so, he elevated the TSN brand and created his own brand."

McKenzie and Nickson will be recognized by the Hall of Fame Nov. 9 in Toronto, McKenzie's hometown.

"I'm honoured to be recognized with the Elmer Ferguson Award and proud to be a member of the hockey-writing fraternity," McKenzie said. "All I ever wanted to be was a hockey writer. As a kid, I looked up to the Red Burnetts and Scott Youngs of the world. When I got into the business I aspired to be as good as John Herbert in junior hockey and Red Fisher or Bob Verdi in the NHL. I have tried every day to bring a hockey writer's and reporter's sensibilities to whatever job I'm doing, whether it's been in print, broadcast, electronic or social media."

McKenzie, 58, has covered major junior hockey for the Sault (Ont.) Star, acted as Editor-in-Chief of The Bible of Hockey, wrote a hockey column for the highest-circulation newspaper in Canada, pioneered the position of television Hockey Insider, established himself as the most commanding hockey presence/news source on twitter and writes a weekly column on TSN.ca.

It was in Sault Ste. Marie where McKenzie got his start in 1979 after earning a Bachelor of Journalism at Ryerson Polytechnical Institute in Toronto. He covered the Ontario Hockey League Greyhounds and remembers, amongst other things, battling with head coach Terry Crisp, who would go on to coach in the NHL.‎

"In my first full season covering the Greyhounds, I wrote a column taking Terry to task after his first year as coach and he went ballistic on me," McKenzie recalled. "Terry wanted me banned from the dressing room so Sam McMaster, the GM, did just that, except he didn't tell me and the letter saying I was banned was posted on the inside door of the dressing room.

"When the media was in the room and the door was open, no one could see it, including me, but when Crisp was in the dressing room with the door closed, he would see it and be comforted. I did my job as usual. Crisp was never in there when the media was in there, I never knew I was banned until a player said, 'What are you doing here, you're banned?' I said, 'No, I'm not,' and he closed the door and showed me the letter. I asked Sam, 'What the hell,' and he laughed and said, 'Sshhh, Crispy is happy and you're still doing your job.'

"Terry and I are friends now, but it was a good learning process to realize your words have impact‎ and the job can get uncomfortable."

McKenzie was working part-time at The Globe and Mail when The Hockey News came calling in 1982. He would serve a nine-year term as Editor-in-Chief, during which McKenzie transformed THN into a hard-hitting, must-read. He was regarded as the head and the heart of the publication, writing columns and cover stories, attracting an all-star cast of contributors and conceiving major initiatives such as the Draft Preview and INSIDE Hockey magazine.

"I'm proudest of the draft coverage we initiated at THN," McKenzie said. "Before then the Central Scouting ranking list was treated as top secret by the NHL. It was our mission to get the rankings and it was theirs to keep it from us. They used to play a game of cat and mouse – actually sending out different rankings to different teams to see if they could find out who was leaking the information. We eventually started doing our own rankings and prospect profiles that became the Draft Preview."

McKenzie's annual ranking – determined by a consensus of NHL team scouts – changed the draft landscape, providing inside information for fans and media and a useful resource for teams who could take into account the consensus ranking when formulating draft strategy.

It was during that time, in 1987, McKenzie began contributing to TSN, his role growing from The Hockey News television edition contributor to major junior and World Junior Championship analyst.

McKenzie left THN to become the hockey columnist at The Toronto Star in 1991, where he provided opinion, perspective and breaking stories. Among many noteworthy stories, McKenzie broke the news of short-term NHL president Gil Stein orchestrating his own election to the Hockey Hall of Fame in 1993. Stein's election was eventually overturned.

During the 1993 NHL playoffs, McKenzie wrote that it looked like Wayne Gretzky, "was skating with a piano on his back" in the Stanley Cup semi-final series against Toronto. Gretzky told his father, Walter, before Game 7, "This piano has another tune to play," and produced three goals and two assists in a win over the Maple Leafs, a performance Gretzky calls his best NHL game.

McKenzie returned to The Hockey News for a three-year stint in the late 1990s before leaving THN a second time in 2001 to become the first full-time TV Hockey Insider and major contributor to tsn.ca. Notably, he broke the story of the NHL rejecting a key NHLPA offer during the 2004-05 lockout; the union said it learned of the league's official rejection from his story on tsn.ca. Additionally, when multiple news outlets reported NHL coach Pat Burns had passed away, it was McKenzie who reported, with quotes from Burns himself, that the coach was still very much alive.

"Sure, there's the million Twitter followers and the fact his peers often refer to him in reverential terms like 'The Godfather,' " Burnside said, "but what is at the heart of the matter is Bob's work ethic. It is what has carried him through various incarnations in his long and impressive career in the hockey business from ink-stained wretch to broadcast and internet presence. He is old school while still being very much on the cutting edge. That's not an easy thing to do. But he's been able to adapt and remain relevant because he works so hard and because so many people throughout the game of hockey trust him implicitly. There is, quite frankly, no one like Bob McKenzie in our business today and it is a great pleasure to see him receive this honor from the PHWA."

McKenzie says his two abiding passions are his family and his career, in that order.

He has been married for 35 years to Cindy. They have two sons -- Mike, 29, and Shawn, 25 -- and both are involved in hockey. Mike played NCAA Division One hockey for four years at St. Lawrence University and had a two-year professional career before becoming a coach. He's currently in his fourth year as a member of the management team/coaching staff of the OHL's Kitchener Rangers. Shawn, a graduate of the College of Sports Media in Toronto, is a Rogers sports reporter who covers the NHL.

Father and son are covering this year's Stanley Cup final for rival networks.