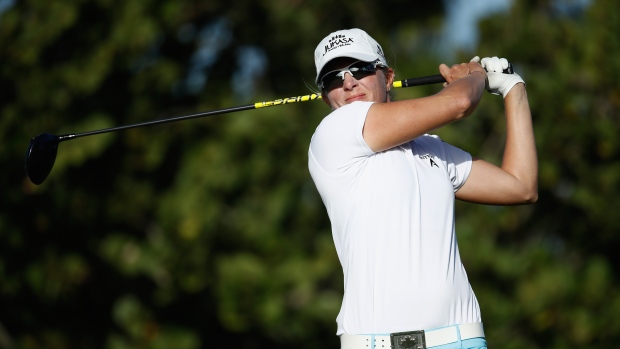 Alena Sharp isn’t about to panic just yet. While her year hasn’t started well, the LPGA Tour veteran knows there’s a lot of golf still to be played. However, this wouldn’t be a bad week to have her game kick into gear.

She’s in the field for the KPMG Women’s PGA Championship at the Atlanta Athletic Club, the third women’s major of the year.

“My game feels pretty good,” said Sharp before heading out for a nine-hole practice round on Wednesday. “I’ve been working hard on things, so hopefully we’ll see that this week.”

A younger Sharp might have begun to worry, to press and try to make things happen. Now in her 16th year on tour, she knows that’s exactly what not to do.

“I know that I have to stay patient,” she said. “That’s going to be my mantra for the rest of the year. I know I have to do something but I can’t be thinking about that while I’m playing.”

Sharp recently spent time working with her coach, Brett Saunders, focusing a lot on putting. She’s averaging a lofty 31.65 putts per round, which ranks 149th on the LPGA Tour.

“I’ve struggled on the greens all year,” she admitted. “I just haven’t felt comfortable over my putts at all, but I think we made some progress.”

Sharp showed signs of improvement last week at the Meijer Classic, although she still missed the cut by a shot, something she called annoying.

This week could go a long way towards improving her year. The purse is $4.5 million, one of the largest in women’s golf. The course is also high calibre although so far it’s been soft thanks to a lot of rain over the previous week.

“This is the best major we have in my opinion,” said Sharp. “It’s a really big week and KPMG does a great job in hosting it.”

As is usually the case, Sharp will be one of the oldest players in the field. The average age on tour is 24.5 but along with 43-year-olds Cristie Kerr and Angela Stanford, and Laura Davies, 57, she continues to hold her own against the kids.

Her veteran status has also given Sharp perspective on the tour’s operation and last year she became one of three player directors on the LPGA Tour’s board. She was part of the search committee that recently chose Mollie Marcoux Samaan to take over as commissioner of the circuit, replacing Mike Whan who is leaving to head up the United States Golf Association.

In August, Sharp has another job, representing Canada at the Olympics. Along with Brooke Henderson, it will be her second time as an Olympian having played in Rio in 2016. The Canadian women’s team will be officially announced on Monday.

“I’m looking forward to representing Canada and wearing the red and white again,” said Sharp, who will have her wife and caddie Sarah Bowman alongside. “I think it will be a little easier this time knowing what to expect.”

That will come next month. For now, Sharp wants to focus on this week’s event, one shot at a time, and get her game back on the track that’s let her play so well for so many years.