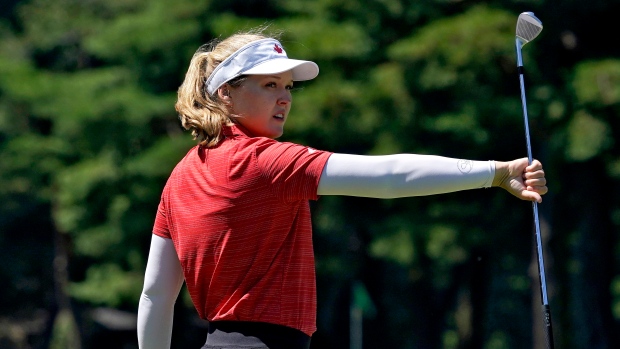 Brooke Henderson and Alena Sharp seemed to play their third rounds at the Olympics in small bursts on Friday as they recorded scores of 71 and 69, respectively.

The two Canadians are well back in the 60-player field and out of medal consideration as the event nears its conclusion.
For Henderson, starting on the back nine, she birdied the 11th but then bogeyed three of her next five holes. She flipped that on her second nine, making birdies on the fifth, sixth and eighth before concluding her day with a bogey on the ninth hole.

It was another frustrating outing for the Henderson, who came to Tokyo as a legitimate medal favourite but has not yet found any rhythm to her play.

“There's definitely some good things about it,” said Henderson of her third round. “Obviously it did not go as I would have liked and I didn't hit the ball as well as I normally do, so I really had to grind it out and get up-and-down sometimes and make lemonade out of lemons sometimes today.”

It was a lot of gritty work, but it didn’t lead to much progress on the leaderboard. Henderson was sitting in a tie for 40th, an unfamiliar spot for the seventh-ranked golfer in the world. Still, the optimist would see that for the second straight day, Henderson’s putting was passable. She picked up a third of a shot on the field in the Strokes Gained: Putting category. The pessimist, however, would see that for the week, she is still just a couple of spots away from last place in that category.

Another issue is her driving accuracy, which has been lacking. Through 54 holes, she’s managed to find just 22 of 42 fairways. Trying to play from the gnarly rough at the Kasumigaseki Country Club has proved exceptionally difficult. That has caused her to miss greens and that’s transferred into her scrambling numbers where she’s just seven of the 14.

In the intangibles category, there is also the heat, which has made it feel like playing golf in a sauna.

“It's very hot,” said Henderson, who praised her sister Brittany for doing the heavy lifting in the high temperatures. “I'm feeling pretty good. I feel like it hasn't really affected us too much, a couple shots here and there just because you're not thinking maybe as clearly as you should be which definitely can cost you because one shot can lead to another one. But for the most part we're just trying to stay hydrated and fueled up.”

Despite all this, there is no quit in the Smiths Falls, Ont., product and she was still looking ahead to the final round.

“It’s just like nice that I kind of have that courage and that grind in me because it's tough to keep going when you're that far down on the leaderboard, but just plugging away and hopefully I can make some more birdies tomorrow.”

All that’s left now for the 23-year-old is to finish out the tournament and use a good finish to reset for Women’s Open Championship, which starts on Aug. 19.

“I played consistent like yesterday,” stated Sharp, “but I made some more putts today. I left a few out there but it was nice to see a longer one go in on the last hole.”

As with Henderson, the 40-year-old Sharp was approaching the final round with determination, pointing out how Nelly Korda came close to shooting 59 in the second round and that possibility exists. But she also expressed a more attainable goal.

I just want to be better every day,” she said, “and have my best round tomorrow.”

There is a chance there won’t be a tomorrow. A tropical storm is driving towards Tokyo and that could wipe out the final round of golf, forcing organizers to revert to 54-hole scores.

Knowing that possibility existed, the leaders pressed hard to work themselves into medal position on Friday. Korda leads by three shots, sitting at 15-under par after a third-round 69. Aditi Ashok of India was in second at 12-under and there is a four-way tie for third spot between Lydia Ko, Hannah Green, Emily Pedersen and Inami Mone.