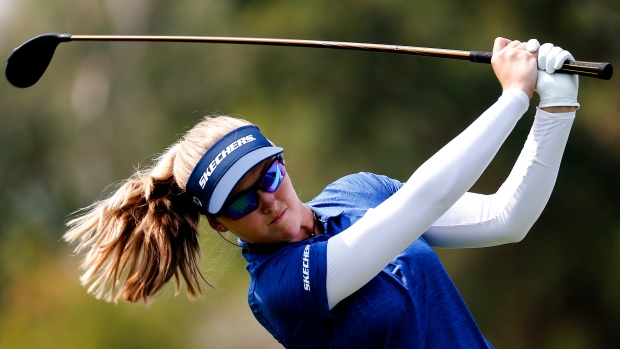 In 2014, Brooke Henderson stood on the 18th green for the winner’s presentation for the U.S. Women’s Open. She wasn’t the champion that year; that honour went to Michelle Wie. But she did finish as the low amateur with a tie for 10th, and received a medal for her play.

At 16, it was a pretty heady moment for the young woman who has gone on to a tremendous career as a professional. But she’s in no way ready to settle with that as her only distinction.

“I got the little medal that day,” Henderson said on Wednesday at the Olympic Club in San Francisco, Calif., site of this year’s U.S. Women’s Open, “but hopefully someday I'll get the big trophy.”

That could easily come this year. Henderson comes into the Open having logged a win and three other top-10 finishes this season. She sits fifth in the Rolex (world) Rankings and feels confident as she approaches her ninth start in the American championship.

“Having that win in L.A., I guess around two months ago, was huge,” said Henderson. “It gave me a lot of confidence back and got me really excited for the rest of this season. I was able to have a few more top 10s this season. I feel like overall I'm in a pretty good place.”

Confidence will be a much-desired commodity this week as the players take on an extremely difficult test at the Lake Course at the Olympic Club. The last major hosted here was the 2012 U.S. Open men’s event where Webb Simpson won with a score of 1 over par.

Hitting fairways is never easy on this course at the best of times with fairways that dogleg in the opposite direction to the slope of the landing areas. The penalty for missing this week is exceptionally severe with gnarly rough that will make it hard to extract any errant shot. Added to that are elevation changes of some 1,100 feet and temperatures that are expected to be in the low to mid-teens along with some fog and it will be somewhat of a survival test.

“I think you kind of have to be prepared for everything, all the challenges,” said Henderson, 23. “That's exactly what a U.S. Women's Open should do, should test you physically and mentally, and you should be drained at the end of the week.”

The Smiths Falls, Ont., product, normally one of the most aggressive players on the LPGA Tour, said she may dial back on the number of drivers she hits this week, saying a short ball in the fairway will be better than a long one in the rough.

She is also hoping to count on the continued improvements to her putting, which is a never-ending work in progress. When she won in L.A., she averaged under 30 putts a round and that would be more than welcome this week.

Overall it will be a week of tempered expectations, as U.S. Opens usually are.

Henderson could also use a solid start on Thursday’s opening round when she will play alongside Lexi Thompson and Patty Tavatanakit. In her last 10 majors, she’s only finished the first round inside the top 10 once. Her average placement in those starts is 43rd. Her last two U.S. Opens she was 47th and 43rd  after Round 1, which led to finishes of T44 and T39. Trying to play catch-up on a course such as Olympic is not an easy task.

Despite the punishing layout, the physical and mental challenges, and the pressure of a major championship, Henderson is still hoping to keep a smile on her face this week.

“You know, knowing how demanding it's going to be and how tough it's going to be on you,” she said, “I think it's important to recognize that, but also enjoy yourself. I think just being here, so many people try to make it to the U.S. Open, and to have the chance to compete for the trophy and be here I think is just really exciting and an honour, and I think it's really important to appreciate that.”

Three other Canadians are in the field this week. Rebecca Lee-Bentham of Toronto, Kelowna, B.C.’s Megan Osland and amateur Noemi Pare of Victoriaville, Que., all made it into the tournament through regional qualifying.