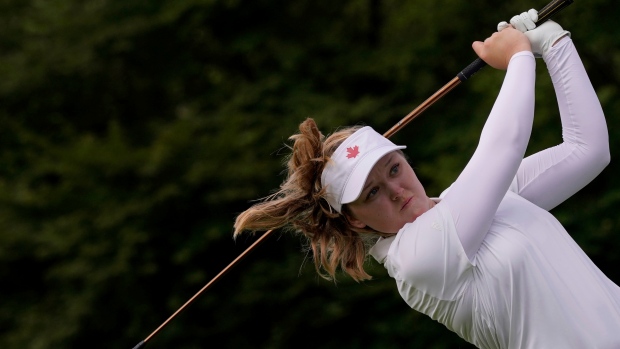 There were short putts and long putts. Some were straight and others with lots of break. A few uphill, others downhill and some sidehill. But not matter what the path, Brooke Henderson simply couldn’t find it, ending the opening round of the Olympics with a three-over 74.

With the rest of her game showing good form, the score was about the highest the 23-year-old could have managed. Her lone birdie came on the par-5 fifth hole when she reached the putting surface in two shots and rolled her eagle putt up to three feet.

That was pretty much the highlight of the round. The rest was a frustrating battle on the greens. Not surprisingly, the Canadian was dead last in Strokes Gained: Putting, giving up more than five shots to the field.

“I hit it really well especially on the front nine,” said Henderson. “Gave myself a lot of good birdie opportunities, just didn't get them to drop as many putts as I would like.”

On the front nine, most of Henderson’s attempts were from long range, averaging 26 feet. A few burned the edge of the cup but refused to drop. Others were off line or off speed and never had a chance. Considering the distance, the result wasn’t a complete shock.

The back nine was different. Her first blip came on the 11th hole when she couldn’t drop a slippery three-footer leading to a bogey.

On her last five holes she had putts inside 10 feet and failed to convert any of them. She ended up playing that stretch in three over par.
“Only one birdie on the card today, which makes it tough to score and obviously a rough finish to get I guess 4-over on the back nine,” she said. “I feel like it definitely wasn't 4-over worthy, so hopefully tomorrow can clean that up a little bit.”

Not surprisingly, Henderson went directly to the practice putting green after her round to try and sort things out.

Shaky putting is nothing new to the 10-time LPGA Tour winner. She is ranked 128th on the LPGA Tour in putting average. She has looked for remedies in a myriad of ways. She’s changed putters, changed grips and spent time in the off-season trying to improve her green-reading skills with the help of her sister, Brittany. While she has good weeks with the putter, such as when she won the Hugel-Air Premia L.A. Open earlier this year, averaging 28 putts per round, the bad ones can be extremely frustrating.

Henderson has been open about her putting woes, acknowledging it as the weakest part of her game. So far she’s been unable to find a consistent solution despite lots of hard work.

She now finds herself a long way back of the lead and in a deep hole. Slow starts are nothing new to the Smiths Falls, Ont., product. This year, in seven of her 15 tournaments, her first round was her highest score, including her win. She’ll hope that’s the case this week and look to find some magic on the greens the next three days.

Alena Sharp logged the same score as Henderson, starting her day by holing a 26-foot putt for birdie on the first hole and ending it with a double-bogey which had her stick-handling her ball down to the green for a six.

“Played solid all day and to finish like that is not, obviously, great,” she said. “But three more days to go.”

The veteran spent a lot of time hitting out of the rough, reaching only six fairways. But she was hot with her wedges, using them to set up good birdie opportunities and par saves.

“I'm hitting my wedges really well,” she stated. “Every time I had a wedge in my hand I hit it inside 12 feet. So drive it a little better tomorrow, have some more opportunities in the fairway.”

The Kasumigaseki Country Club was playing long, with organizers stretching out the course that forced golfers to hit long irons and hybrids into a number of holes. For most, the par 5s were three-shot holes.

The greens were also exceptionally firm and it was tough to get wedges to hold, many running out after landing, making it difficult to get shots close.

And then there was the heat, with temperatures in the high 30s and the humidity piling on to push the Humidex into the 40s. Players hid under umbrellas, seeking out any sort of shade, draped wet towels around their necks and drank gallons of water. Lexi Thompson’s caddie, Jack Fulghum, was forced off the course when the heat became too much. An American official picked up the bag for the last few holes.