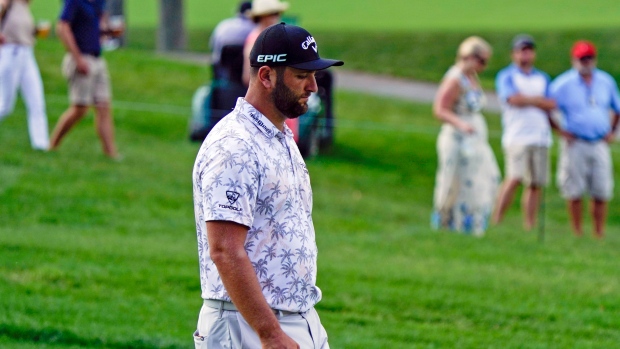 After staking himself to a record-setting performance at the Memorial and heading into Sunday with a six-shot lead, Jon Rahm was forced to withdraw after a positive COVID-19 test.

Rahm was given the news beside the 18th hole after he finished his third round and doubled over before heading into the scoring trailer.

The Spanish golfer was in contract tracing after being told by the PGA Tour on Monday that he’d come into contact with a person who had tested positive. Under the protocols, he was allowed to stay in the tournament but had restricted access on site.

During the week his tests came back negative. However, a test after his rain-delayed second round returned a positive result and a confirmatory test ordered by the PGA Tour on the same sample was also positive. Under the tour’s protocols, Rahm, who is asymptomatic, was forced to withdraw and enter quarantine for 14 days. That will take him up to the Tuesday of U.S. Open week.

Rahm’s test was only the fourth in competition since the PGA Tour returned to play a year ago. The tour has had a strong record of avoiding any significant issues surrounding COVID-19 and has had very few positive tests. There has also been no community spread among tour players.

“That's obviously really disappointing. It's kind of the worst situation for something like that to happen and he played awesome today and it's just, it's really, it's a shame. It's unfortunate,” said Patrick Cantlay, who played with Rahm and now enters the final round tied for the lead with Collin Morikawa.

“I didn't see any activity on the green,” said Scottie Scheffler, the third member of the Saturday Rahm group, “so I kind of smiled at him just to see and, I mean, he just goes, ‘Good luck tomorrow,’ and, I'm, like, ‘Thanks, man. You play good too.’ I was just really confused. He's, like, ‘No, man, I just tested positive.’ My heart just sank. It's terrible that that happened.”

Both Cantlay and Scheffler have already had COVID-19 and were unaware if they would require contact tracing as well.

The PGA Tour recently relaxed its testing protocols for those fully vaccinated. It’s unknown whether Rahm was vaccinated.

If he had gone on to win the Memorial on Sunday, his first prize would have been $1.6 million.

Many questions remain to be answered such as whether other players who came close to Rahm will be tested and what happens if one of those wins the tournament and then tests positive?