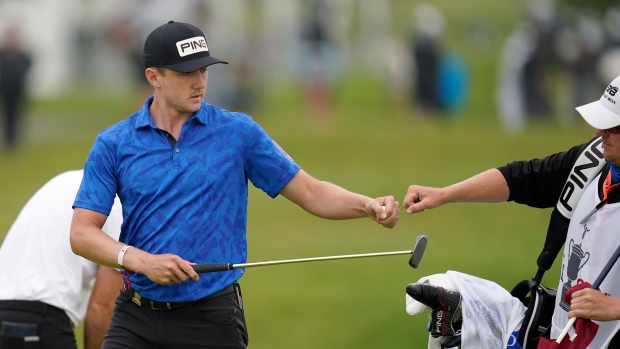 At last April’s Masters, Mike Weir played a practice round with Corey Conners, Adam Hadwin and Mackenzie Hughes. In addition to showing them some of the secrets to Augusta National’s slippery greens, he gave them all a blunt assessment.

“You guys are good enough to win a major,” he told them. “You just have to believe in yourself.”

Those are words that Hughes will take to the first tee on Sunday afternoon as he tries to join Weir as a Canadian male major champion. After a third-round 68, Hughes put himself into the final pairing at the U.S. Open. He’s the first Canadian man to sit in that position since Weir did it at the PGA Championship in 1999.

“Weirsy’s been a huge motivation for me and a great mentor,” said Hughes, who will play with Louis Oosthuizen. “And not only hearing it from him but watching Corey, he was in contention at the Masters, at the PGA as well. I play with Corey every day. Corey’s really, really good but I know I can play with Corey too. All that stuff just helps give me the belief that I can do it as well.”

Hughes’s position at the top of the leaderboard is somewhat surprising considering he arrived at Torrey Pines off five missed cuts. But he’s busted out of slumps at mach speed in the past. Last year, he finished tied for second at the Honda Classic after missing his previous five cuts.

The U.S. Open is a different stage, of course, one of the biggest in golf. And Hughes is going to have to battle some of golf’s top players such as Rory McIlroy, Bryson DeChambeau, Jon Rahm and Dustin Johnson, all of whom have a lot more experience in these sorts of things. But he knows what’s ahead and what’s required of him.

“It’s going to be really hard,” he acknowledged, “but you have to put yourself in that position to see how you handle it.”

That’s the type of thinking that has allowed Hughes to reach this point in his career. He’s won at every level, each one a difficult step at the time. He’s won the Canadian Amateur, in NCAA competition while at Kent State, on the Mackenzie Tour-PGA Tour Canada, on the Korn Ferry Tour and the PGA Tour.

There have been plenty of down times too. Streaks of missed cuts or mediocre play but his game has grown along the way. So, too, has his outlook.

“I think the biggest thing for me tomorrow it to just kind of enjoy the moment,” he stated. “It can pass you by quickly if you are head down and focus for all five hours.”

While a lot of players came off the South Course at Torrey Pines on Saturday frustrated and dejected, Hughes called his day fun. He wants to have more fun on Sunday.

Right now, he’s riding a wave of inspired play. A small change in his ball position has given him confidence in a cut that he’s been playing all week. His caddie, Jace Walker of St. Thomas, Ont., called it his go-to shot this week.

His short game has also been on fire this week, highlighted by a 63-foot eagle putt on the 13th hole on Saturday. Along with some brilliant wedge play from the gnarly rough, it’s taken some of the pressure off a driver that was not performing that well in the first two rounds.

Hughes has also been using some mental cues to try and keep his mind on track without grinding the gears off. When asked what those cues were, he declined to say.

“I don’t want to divulge any secrets,” he said with a wry smile.

Hughes was planning to spend Sunday morning with his wife Jenna and their two young boys, celebrating Father’s Day. Then he’ll head to the course to try and make a little history. However he’s got things in perfect perspective.

“I don’t know if I’m going to win or shoot a high score,” he said. “I’m just going to try and do my best tomorrow.”