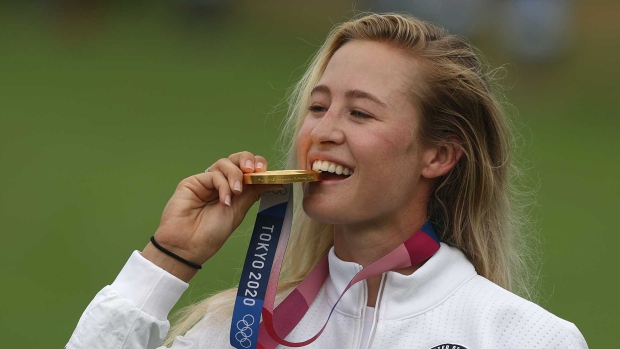 After two weeks of golf in a sweltering Tokyo, golf in the Olympics left some lasting memories as well as some questions for the future.

If there were any doubts Nelly Korda is the best player in golf right now, they’re gone now. Korda came into the Olympics on a heater of a year. She is the top-ranked golfer in the world, a major winner after her victory at the KPMG Women’s PGA Championship, and the leading money winner in women’s game. She added to her great year by winning the gold medal on a tense final day at the Kasumigaseki Country Club. She becomes the first American woman to win a medal in Olympic golf and joins Xander Schauffele in a U.S. sweep of top spot at the Tokyo Games.

Her final round wasn’t flawless and certainly had a few speed wobbles. A sloppy double bogey on the seventh looked to be the start of her downfall. Instead, she followed it with three consecutive birdies and never gave up top spot on the leaderboard although she welcomed a few co-leaders from time to time.

But one by one, the challengers fell away, and a par on the final hole was enough for a gold medal.

“I mean you're playing for something way bigger than just yourself, you're playing for a gold medal,” Korda said. “You're playing for your country and I mean it's an amazing achievement, so obviously that kind of, it was in the back of my head, yeah, so it's a different feeling, but I feel like as a golfer or just an athlete you go into every competition or every whatever tournament wanting to win, you have a one goal and that's to tee it up and hopefully make the last putt on Sunday.”

But the fun didn’t end there. A playoff to decide the silver and bronze medals between Lydia Ko and Mone Inami was a perfect conclusion to two weeks of riveting golf on a tremendous course that was well-suited to the test. The playoff didn’t have the same intensity as the men’s (see next block) as both players knew they were going home with a medal. But to see a Japanese player on the podium with a silver medal was fitting.

Was there a more riveting championship in men’s golf this year than the Olympic tournament? The other four majors offered some intriguing story lines: Hideki Matsuyama as the first Japanese man to win a major or Phil Mickelson capturing the PGA Championship at 51. But neither of those offered the 72nd-hole drama the Olympics did. Not only did Xander Schauffele hit a perfect wedge shot with the gold medal on the line, but also the playoff for bronze was spectacular.

How would you classify the performance of the Canadians? Solid? As expected? Disappointing?

Certainly among the team – administrators, coaches and players – there were big hopes for medals but that didn’t pan out.

Corey Conners ended up 13th while Mac Hughes was 50th. Neither one got off to a great start and then it was a game of catch up that they weren’t going to win.

Alena Sharp played a lot coming into the Games and also put in a lot of work. She admitted that she might have simply run out of gas in Tokyo.

And Brooke Henderson was the top Canadian hope. By her own admission, she just didn’t play well, especially with that putter on the first day.
But maybe we leave it to the 10-time LPGA Tour winner to sum up her week and to put things in a different perspective.

“I'm really excited to be a two-time Olympian and to be able to compete here this week,” said Henderson. “Although it didn't go as well as I would have liked just having the opportunity to be here with the best athletes in the world I'm inspired and so hopefully the young boys and girls watching back home and really people of all ages hopefully they can take something away from these last two weeks this incredible Olympic experience and hopefully the game of golf grows.

“I feel like playing in the Olympics for golf is like huge, just such a big stage and I feel like it reaches a lot more people, which is really exciting and hopefully the future is bright for Canadian golf and all around the world.

Prior to this year’s Olympics, there was plenty of talk of switching up the format of the golf competition. Perhaps a two-player event or possibly a mixed format might spur more interest. But the International Olympic Committee asked for a 72-hole stroke-play competition for the first two Games. That deal has been done and now comes the opportunity to offer something different.

If golf needs an example of how to get inventive, it could look to curling, which has followed a similar path. After regaining a spot on the Olympic schedule in 1998, curling added a second format, mixed doubles, in 2018. It was a creative game, intended to grow the sport by making it quicker to play, use fewer players and put men and women on the same team.

Could golf come up with a similarly interesting format that might offer changes to some of the issues facing the sport such as slow play? The opportunity is immense.

Aditi Ashok and Growing the Game

One of the primary reasons for the governing bodies pushing to get golf into the Olympics was to grow the sport in parts of the world where it isn’t mainstream. India would count as such a place. While there have been a number of successful Indian golfers such as Anirban Lahiri and Jeev Milkha Singh, the sport doesn’t receive much attention. Except when the Olympics is on.

This week’s performance by Ashok is a perfect example of the power of the Games. The 200th-ranked golfer became a star with her short drives and exceptional putting. And she created a huge stir in her homeland with her run for a medal. She was the top trending topic on Twitter in India as she played the final holes.

“I think nobody really follows golf as much,” said Ashok. “It's not that they know about it and don't follow it, it's just they don't know much about the sport to know that a major is more prestigious than the Olympics.”

Since she played in Rio where she finished in 41st spot but became a sensation in her home country as the only Indian woman in the golf event. Now, with a fourth-place finish, she is doing in India precisely what governing bodies hoped a player such as her might.

How many more men will shop up in Paris?

While the best women players showed up in Tokyo as they did in Rio, there were still a number of absences among the men. Notably Dustin Johnson and Louis Oosthuizen.

That was far less than Rio but still glaring by the omissions. However there were converts. Rory McIlroy, once a naysayer of golf getting into the Games, was in full support after his experience.

"I certainly didn't expect to feel the way I did when I was there,” he said, “but it was great. It was a great experience. I had a wonderful time.”

He is already looking forward to Paris, he said.

Now the question is who else will show up in 2024? Has the two-Games run been enough of a success to lure all the top male golfers? Will it be easier on the schedule going to Paris than Tokyo in the middle of the season?

After her final round, veteran Alena Sharp was asked what made golf great. Her answer is perfect.

“I think golf's an amazing game an amazing sport to play,” she stated. “Every day it's a challenge within yourself and I think it's great, it's a great way to be out with your friends and get good exercise and then one day if you're keen and practice enough you make the Tour and then you get to represent your country. There's no better feeling.”