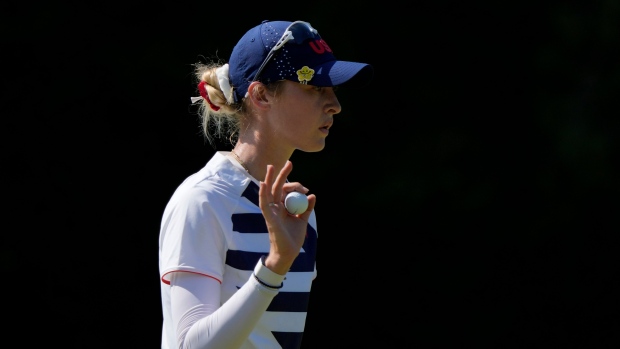 The temperatures at the Olympics in Tokyo are hot, but Nelly Korda’s game may be hotter.

The American showed why she is the No.-1 ranked golfer in the world on Thursday, flirting with a round of 59 before settling for a jaw-dropping 62 over the Kasumigaseki Country Club. She leads the tournament by four strokes.

“I've had a lot of good rounds this year, I've been playing really well, I've been striking it really well,” Korda said. “I think I've had a couple 9-unders, so it was definitely one of the best, yes, but golf humbles you. I got a nice little double on 18.”

Korda played her last five holes on the front nine in six under, making the turn in 30 and, after pars on 10 and 11, rattled off five more birdies in her next six holes. She came to the final hole needing a birdie for 59 but when her drive ended up in the rough and her line to the green was partially blocked by a tree limb, she elected to lay up and forgo the shot at the sub-60 round. A botched approach that ended up in a greenside bunker led to the double.

“I had a really good stretch of holes. I think I was like 4-under or 5-under through four holes at one point on the back. Or on the front. The heat's getting to me,” said Korda, who drained six putts from outside 15 feet. “I just stayed really solid today. On the front I was definitely hitting it better and on the back I wasn't hitting it as well but making the longer putts.”

The score continues what has been a tremendous season for Korda, 23. So far this year on the LPGA Tour, she has three wins and eight top-10 finishes in 13 starts. One of her victories came at a major, the KPMG LPGA Championship.

The chasing pack includes a pair of Danes, Emily Pedersen and Nanna Koerstz Madsen, who shot rounds of 63 and 64 respectively. They grew up playing at the same club and their parents live about 500 metres apart in Copenhagen. The two had a rivalry growing up which has been a factor in their success.

“I was 10 and Nanna was 12 when I started and we kind of always have been pushing each other, competing,” said Pedersen, “and I think that's one of the reasons we're both so good and it's been a good environment to grow up in, having someone to push you a lot.”
Also at nine-under is Aditi Ashok of India, who competed at the last Olympics in Rio as a teenager. The 200th-ranked golfer in the world followed up the opening-round 67 with a 66 that included birdies on three of her final four holes. Through two rounds, she’s made just a single bogey.

Her play is getting plenty of attention back home, a place where golf is not often in the spotlight.

“Definitely because that's exactly what the Olympics does for a golf in India,” she said. “Olympics is huge. In a regular event people just wouldn't follow it as much, even if it was a LPGA event or a major. So, yeah, I think the buzz has been good so far.”

The Canadian duo improved on their slow starts in the first round. Brooke Henderson rebounded with a three-under 68, led by a large improvement in her putting. She dropped putts on the first two holes from seven and 17 feet, and although both were for par, it set the tone for the rest of the day with the putter.

“It felt good to make some birdies out there,” said Henderson. “It's more like my old self which feels good. Hopefully just kind of continue the momentum into tomorrow and Saturday and hopefully make a lot more birdies and climb up as much as possible.”
Alena Sharp made one birdie, one bogey and 16 pars for an even-par 71, three shots better than a day earlier. The long line of pars on the scorecard hid a scrambling start that she eventually managed to correct.

“Didn't hit a lot of good shots the first five holes but got up-and-down,” said Sharp. “Then I think that calmed me down. I found it on number 8. Hit better shots, my tempo was better, I gave myself opportunities, hit a lot of good putts that didn't go in. Finally made a birdie on 15. Had chances coming in on 16 and 18. But happy with getting it back to even, because I was over par early and obviously would be nice to be more under par today, but I'm happy with my finish, the way I started, for sure.”

The punishing heat continued during the second round with the Humidex pushing temperatures into the 40s. Umbrellas, bags of ice and finding any spot of shade were the orders of the day.

But the weather has become about more than just the heat. An approaching tropical storm is set to hit the Tokyo area on Friday, which may play havoc with the schedule.

Organizers were considering reducing the tournament to 54-holes but on Thursday, a note sent to players stated they would try to complete all four rounds, although it may require them to play Sunday if necessary.

“If we do not complete 72 holes on Saturday we do have the option to finish 72 holes on Sunday if weather permits,” the note stated. “If we are unable to complete or start 72 holes, the Olympic Women’s Golf Competition will revert to a 54-hole event.”