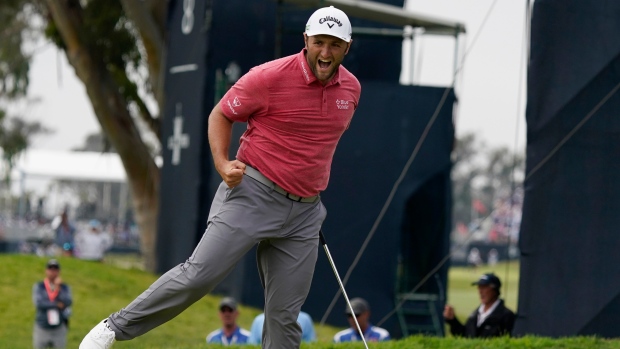 The year’s third major championship gets underway at The Country Club in Brookline, Mass., one of the five founding clubs of the United States Golf Association. There’s lots of history here but the old course has been given a tune-up ahead of this edition of the U.S. Open. That was done at the hands of Gil Hanse, who also happened to fix up Southern Hills, site of the PGA Championship last month. The rough is long, the greens small and you don’t want to be above the hole. That might sound familiar because that was the description of St. George’s Golf and Country Club, where last week’s RBC Canadian Open was played. All this means accuracy off the tee and into the greens is imperative and a hot putter won’t hurt.

Sure this is an easy pick if you’re going with the coming-in-hot method of selection, but McIlroy isn’t just playing well, he’s playing the way you need to play to win U.S. Opens. He’s hitting enough fairways and reaching enough greens to give him chances for enough birdies. His putter was also working for him in Toronto. McIlroy seems in a good space mentally as well, standing up for the PGA Tour in its battle with the LIV Series.

Rahm would love to extend the streak of defending the titles at national championships which currently sits at one after McIlroy’s victory at the RBC Canadian Open. The Spaniard has six top 10s this year including a victory at the Mexico Open – which is another national championship. He’s first in Strokes Gained: Off the Tee and 22nd in Strokes Gained: Approach the Green. Combine those and you can see why he’s up near the top of everyone’s prediction list.

Fitzpatrick won the U.S. Amateur here in 2013 and has professed his love for The Country Club course. That’s easy to see as it’s a great fit for his style of play. Hit it in the fairway – check. Hit it on the green – check. Sink the putt – check. The Englishman has a well-rounded game and also has plenty of patience which will be tested this week. Coming off a tie for 10th last week in Canada.

While best known for winning the Open Championship, Lowry has done fairly well in the U.S. Open as well. He’s made the cut in six of his last seven starts and was tied for second in 2016, behind Dustin Johnson. He’s logged four top-10 finishes this season including a tie for 10th last week at the RBC Canadian Open. And on a course that demands precise iron play, he’s ninth in Strokes Gained: Around the Green. He also owns the fifth best scoring average on the PGA Tour.

Conners has enjoyed some good play at Brookline, making it to the semi-finals of the U.S. Amateur here in 2013 where he lost to Matt Fitzpatrick. His game would seem to fit U.S. Open setups which require a lot of precision off the tee and into the green. He’s coming off that final-round 62 at St. George’s which he said he’s been expecting for a while. The Canadian will be on my card for a win, but you can get tremendous value down the line with him.

Has it really been nine years since Justin Rose won the U.S. Open? Seems like it was just yesterday when he masterfully got his ball around Merion. Since then, it’s been feast or famine: three times inside the top 12 and four times missing the cut. His form of late has been encouraging with three finishes inside the top 14 in his last four starts. That includes last week’s tie for fourth at St. George’s where he posted a final-round 60. His great play of late may be a result of changing coaches. Rose parted ways with his long-time instructor Sean Foley and his new instructor is, well, Justin Rose. He’s going it alone. So far, so good.