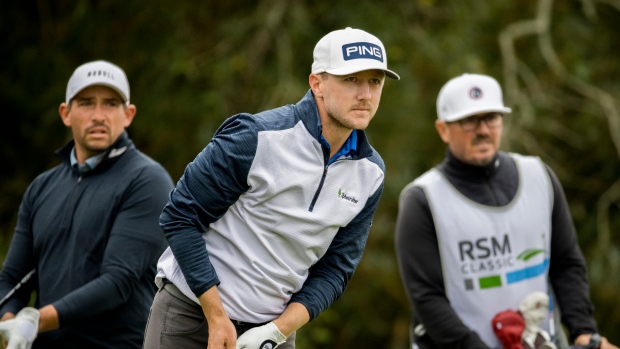 Mackenzie Hughes did as much as he could on Sunday at the RSM Classic, but Talor Gooch did more.

Hughes fired a final-round 62 on the Seaside course at Sea Island, Ga., to finish at 19-under par, but couldn’t catch Gooch, who notched his first PGA Tour victory by a three-shot margin.

“I knew it was going to require a low one today and if you told me I would have shot 62, I thought I might be pretty close,” said Hughes. “But Talor obviously played great this week and deserved to win.”

Hughes started his final round quickly, hitting his approach on the first hole to five feet and on the second to three feet, both of which resulted in birdies. Three more birdies gave him a front-nine score of 30.

His approach on the par-3 12th hole went over the green and he was unable to get up and down, resulting in his lone bogey of the day. He corrected that on the next hole with a birdie and added three more , coming on 15, 16 and 18.

The strong finish wasn’t enough to catch Gooch, who began the day with a three-shot lead. His bogey-free, six-under score allowed him to cruise to the finish line.

“I played well all week obviously,” said Gooch, who played on PGA Tour Canada earlier in his career, “and today being a crucial day, I had a couple opportunities where things could have taken a turn for the worse and I was able to make some clutch putts.”

Although he didn’t get the win at the site of his first PGA Tour victory back in 2016, there was some consolation for Hughes. The result will likely keep him inside the top 50 in the Official World Golf Ranking at the end of the year. He entered the week in 50th spot and the updated ranking will be released on Monday. If he remains inside that number, it assures him of spots in the field at the Masters, U.S. Open and a number of other top tournaments.

“I came into this week 50th in the world, so top-50, year-end was a big goal of mine,” Hughes said. “I get in the majors and some of those WGC events. Accomplished that goal. Came up a bit short of winning, but planning my schedule the rest of the year will be a lot easier just knowing I can bank on those big tournaments.”

Hughes’s game has improved dramatically over the last two years. In 2019, he finished the year in 264th spot in the world ranking. This latest result is his 11th top-10 finish since the PGA Tour returned from the pause due to the pandemic in June 2020 and this past year, he was in contention on the final day at both the U.S. Open and the Open Championship. He has also now gone 13 starts without missing a cut.

“Looking at my own game, I feel like I've been getting better with each week and just trying to get better each week and feel like my game is trending in the right direction and hopefully sooner rather than later we'll get one of those wins,” said the 30-year-old.

Five other Canadians made the cut: Corey Conners ended up 22nd; Taylor Pendrith was tied for 26th; Michael Gligic ended up tied for 29th; Adam Hadwin tied for 51st; and Roger Sloan was tied for 61st.

The PGA Tour now takes a break with the next event being the Sentry Tournament of Champions, Jan. 6-9, 2022.