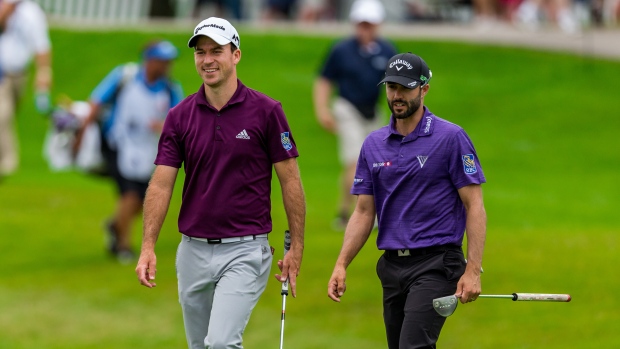 Ralph Bauer is one of the pre-eminent coaches in the golf with a stable of PGA Tour pros under his tutelage, including Adam Hadwin. He’s also spent time working with top Canadian prospects when he was briefly a part of Golf Canada’s national team program.

So he is certainly qualified to judge the talent pool of men in this country, which has never been deeper. Last Monday, for the first time, four Canadians were in the top 100 on the Official World Golf Ranking. Just two weeks earlier marked the first moment there have been three on that same list.

Hadwin, Corey Conners, Mackenzie Hughes and Nick Taylor represent the top part of the strongest contingent to come out of Canada. Add in Roger Sloan, Michael Gligic, veteran David Hearn and the injured Graham DeLaet and the depth is impressive.

But why now? Why is this the time Canadian men’s golf has risen to its loftiest heights?

When asked why these talented players have all arrived at this moment, Bauer had a succinct answer.

"By and large, they’re all pretty boring," he said, adding a laugh at the end of this statement.

The comment wasn’t a reflection of their personalities; it was about the sole commitment each has given to improving, to not accepting mediocrity or complacency. There’s been no partying, no slacking off, and no running around. Each player has treated golf as a job and worked exceptionally hard, driven to reach the PGA Tour and now, continuing to move beyond that to succeed there. And the results are showing.

Canada might not be a powerhouse, but it seems that week after week, there’s a player or two from this country vying for top spot on the leaderboard. Hughes, Conners, Hadwin and Taylor are all winners on the tour with Taylor logging his second title in February at the AT&T Pebble Beach Pro-am.

When surveyed, members of this group of exceptionally talented golfers agreed there’s no one particular reason why they seem to be blossoming right now. Instead, they all pointed to a few different factors that paved the way for this bright moment in Canadian golf.

The first is the training received from Golf Canada’s national team program. Started in 2003, the system was designed to provide assistance on a variety of levels to the top young players in the country. That included access to top-level training, sports psychologists, nutrition experts and fitness specialists. It also gave them opportunities to compete internationally. It was a system other countries used successfully but in Canada, prior to the creation of the national team, the best young golfers were left to fend for themselves.

"It really was about training you to be a professional," said Hughes. "All the things you need to reach the next level. What you need to do and how hard you need to work."

"I don’t think I’d be where I am today without that program," added Conners. "The resources and training helped me build good habits."

But it’s not a required asset in the path to success. Sloan, for instance, was never a part of Golf Canada’s team. He got to the top level in the game all on his own, including paying his own way, sometimes leveraging a credit card or two to get there. And Hadwin only spent one year as part of the national team. But there’s no denying that it’s been part of the foundation for building great golfers.

The second factor mentioned was one of Canada’s greatest sporting moments: Mike Weir’s win at the 2003 Masters. The cadre of golfers were all at an impressionable age when Weir slipped on his Green Jacket and, while it was also the age of Tiger Woods’ dominance, there was something impactful about seeing a Canadian win a major.

"This current crop of guys, they were getting into the game when Mike won the Masters. It definitely inspired them," stated the 41-year-old Hearn, the elder statesman of the group. "You can see it in a lot of countries, when there’s a hero. Look at Australia and Greg Norman."

"We could all relate to Mike," said Taylor. "He was just like us, an everyday guy who grew up in Canada and played hockey."

On his 50th birthday in May, all the current tour players gave Weir a surprise Zoom celebration with each one sharing the story of the impact the lefty from Brights Grove, Ont., had not only on their careers but their lives.

As he moved past his prime, Weir didn’t always reach out to those who followed, preferring to give advice only when they initiated contact. It was because he wasn’t aware of what an influence he’d been to them. He didn’t want to get in their way.

But in recent years, that’s changed. He now understands what a word or a text message can mean and sends them before an important round or after a big win. He’ll be the tour guide at Augusta National in November when he welcomes Conners, Hadwin and Taylor to the Masters, the first time four Canadians have played in that major.

There is also another reason why this gang is thriving right now and it may be the most important: they support each other. That may seem somewhat trivial, but in the past, when the Canadian ranks were thin on the PGA Tour, it was easy to feel alone. Now a feast has replaced the famine.

"When I got out here, there was me, Ian Leggatt and Mike Weir," stated Hearn. "Now we have two foursomes. The older guys look out for the younger guys, and invite them into their group. It’s the Canadian way."

There is also, of course, friendly competition. Hughes told a story of last week’s Workday Charity Open to highlight the rivalry. At one point in the first round, he looked at the scoreboard and noticed Taylor was at four under. He looked again a few minutes later to see that Hadwin was at five under.

"We’re always checking to see how the other guys are doing," admitted Hadwin. "In a small way there’s bragging rights at stake. We all want to be the best Canadian."

Even something as small as dining as a group helps build the support. Last week, four Canadians sat together at a table eating lunch after a practice round with the sight drawing comments from other players in the area noting the Maple Leaf contingent and asking if the conversation was all about hockey. It was, of course.

The group is also close in age and life experiences. Conners is 28, Hughes 29, Gligic 30, Taylor and Hadwin 32 and Sloan 33. Hughes, Hadwin and Sloan all had babies in the last year while Hughes is expecting his second later this year.

This support for each other is not new. These players have been around each other for a long time, sharing laughs and knocking heads. Hadwin and Taylor grew up playing at Ledgeview Golf Course in Abbotsford, B.C. Later, they were roommates while they played what is now the Korn Ferry Tour and in the off-season in Phoenix.

Hughes and Conners battled each other in Ontario amateur competitions for years before becoming teammates at Kent State University.

The support is also generational. Bauer remembered a scene from a practice round at the Shriners Hospital for Children tournament a number of years ago. He watched as Weir explained the subtleties of particular hole on TPC Summerlin to Hearn, telling him where to hit it and where not to go. Flash forward a decade and there is Hearn passing on that same knowledge of that same hole to Hughes, Bauer said.

"The support they have for each other is really something," he stated. "They’re a team out here in many ways."

The connections also extend beyond the PGA Tour. Taylor Pendrith, another Kent State grad and national team member who is playing on the Korn Ferry Tour, has spent considerable time living in Conners’ basement at his Florida home.

Pendrith and Adam Svensson, who spent last year on the PGA Tour before being relegated back to the Korn Ferry Tour, are the next two candidates to move up to the big leagues.

After that, the ranks are not as buoyant as they have been in recent years, although there’s a wide base of Canadians still trying to find their footing as professionals.

Derek Ingram, the head coach of the Canadian national team, said the pandemic pause has given he and everyone involved a chance to review its current system with an eye on the future.

"I think [the program] has been good for the last 10 years," he stated, "but maybe we need to tweak it a bit to focus on getting more athletes involved."

Ingram said the last decade has been a huge success thanks to a lot of hard work from a variety of individuals, including, of course, the golfers, but the world moves quickly. Standing still is not an option.

If there is one battle that will play out among the Canadians, it’s the race to be a part of Canada’s Olympic team at next summer’s Games in Tokyo. A year ago, it appeared a foregone conclusion that Hadwin and Conners would be wearing the Maple Leaf but that’s not certain anymore. The play of late from Hughes and Taylor shows that race is far from over.

"I think it’s in the back of all of our minds," admitted Taylor. "We all want to be on that team. Once the new year hits it will get real."

For now, all involved are enjoying the fruits of past efforts. Canadian men have reached a level many thought they would never attain.

"We’ve been saying this would happen for a long time," said Hearn, "and now it’s happening."

It’s also important to point out that what golf fans are witnessing isn’t some sort of fluke or due to luck. For Canadian men’s golf, this may be the best time there’s been. Perhaps its time to stop asking why and just enjoy what they have to offer.

"Canadian players are good," summed up Sloan. "It’s not like we just caught lightning in a bottle. It’s going to the normal for the next few years."