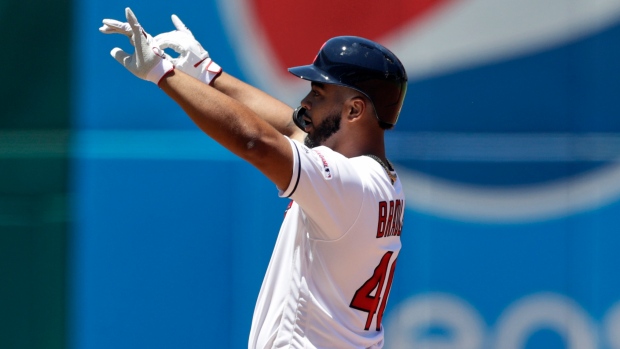 CLEVELAND — Bobby Bradley was showered with applause when he ran onto the field, then soaked with beer upon returning to the home clubhouse.

Both experiences were even better than he had imagined.

Bradley doubled and drove in a run in his first major league plate appearance as the Cleveland Indians completed a three-game sweep of the Detroit Tigers with an 8-3 victory on Sunday afternoon.

The 23-year-old first baseman, who leads the International League with 24 homers, was promoted from Triple-A Columbus earlier in the day and went 1 for 3 with one run and a walk.

Bradley also made a running over-the-shoulder catch in foul territory, delighting the crowd of 25,790 fans that eagerly awaited his debut. He received a final standing ovation when manager Terry Francona removed him for a pinch-runner in the eighth.

"It's just an unreal moment, I mean it still doesn't feel real to me yet," the upper-tier prospect said, his eyes glistening. "Just to be able to be up here and get a hit, it means the world to me.

"I think it's going to kick in for me at some point that today actually happened. I can't complain about anything at all. It's a day I'll never forget."

Bradley's ground-rule double to left field ignited a five-run second inning for the Indians, who are a season-high seven games over .500 and own the fifth-best record in the American League. Francisco Lindor added an RBI double as Cleveland went ahead 5-1.

Zach Plesac (3-2) made the lead stand up, matching his longest outing in allowing one run over seven innings. The right-hander, who made his major league debut on May 28, did not allow a runner to reach scoring position after the first.

"Bobby Bradley is a beast, so I'm excited to be playing with him again," Plesac said. "It's unreal, right away he comes in and gets an RBI, gets a hit. It was only a matter of time."

Carlos Santana hit a solo homer and Jason Kipnis collected two hits and two RBIs for the Indians, who swept a three-game set last weekend in Detroit. Lindor and José Ramírez each had a pair of hits and a stolen base.

Tigers starter Daniel Norris (2-6) remained winless since May 12 despite striking out a season-best eight. The left-hander surrendered six runs over a season-high seven innings and is 0-5 with a 5.48 ERA in his last eight starts.

Detroit manager Ron Gardenhire noted that Norris was hurt by poor defence, including Christin Stewart failing to catch Bradley's looping fly to the corner in left that subsequently bounced into the stands.

"That's a play we think he should make," Gardenhire said. "You have to have a better feel for where you are. We had misplays all day. Mental mistakes lead to a lot of physical mistakes. That's kind of what we do."

Tigers designated hitter Miguel Cabrera singled in the first to move into a tie with Luke Appling for 56th place all-time with 2,749 hits. His 1,665 career RBIs rank 29th, two behind Sammy Sosa.

Detroit has lost four straight, fell to 4-15 in June and was swept for the seventh time this season. The Tigers are 2-14 in their last 16 games at Progressive Field, dropping seven in a row.

Tigers: SS Jordy Mercer (right quadriceps strain) went 0 for 3 with a walk in the first game of his rehabilitation assignment with Triple-A Toledo. He has been on the 10-day injured list since May 8.

Indians: RHP Mike Clevinger (left ankle sprain) is scheduled to be activated off the 10-day IL when eligible on June 28 to start in Baltimore. If he suffers a setback, RHP Aaron Civale will take his spot.