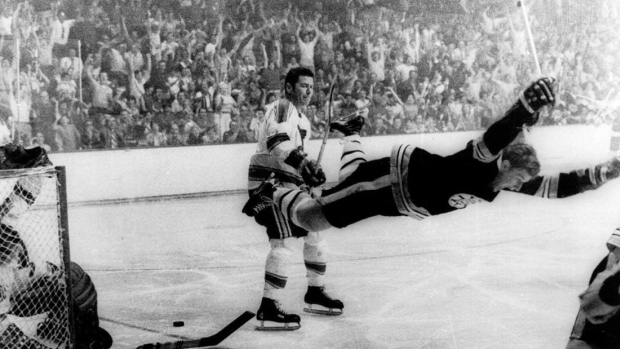 Fifty years ago today, the legendary Bobby Orr scored one of the most iconic goals in NHL history.

It was overtime in Game 4 of the 1970 Stanley Cup Final at the Boston Garden. Orr, who was in his fourth year in the NHL and coming off an incredible 120-point regular season, and the Boston Bruins led the St. Louis Blues 3-0 in the series and had the chance to capture their first Stanley Cup in 29 years by scoring the next goal.

Just 40 seconds into the first overtime period, Orr made a swift cut to the front of the net and received a nice centring pass before using a quick one-timer to score on goalie Glenn Hall to win the league title, the first Stanley Cup of Orr's career.

Orr immediately leapt and flew through the air like Superman in celebration, a remarkable photo captured by Ray Lussier that has gone down as one of most memorable sports images of all-time.

On the 50th anniversary of that memorable night, TSN’s James Duthie spoke to No. 4’s memories of “The Goal."

“Sure, I remember the goal, but the most important thing was the Stanley Cup,” Orr told Duthie. “Growing up in Canada as a young hockey player, everyone’s dream is to play in the NHL and to be on a Stanley Cup team. I was realizing a dream and that was the important thing.”

Orr saw the iconic photo for the first time at breakfast the following morning after his father had bought a newspaper from the local shop.

Orr says the great air he got on the leap was partly attributed to Blues defenceman Noel Picard, who was trying to take out the native of Parry Sound, Ont., on the play.

“A lot of it was the celebration. When I went across the front of the net, I’d like to tell you that I saw Glenn Hall’s legs open and I turned the puck on its edge and I slipped it through. All I was trying to do was trying to get it on net,” Orr explained. “When a goalie is moving across, it’s pretty tough to keep the legs closed so it went between his legs. I saw it going in as I went by so part of it was a jump and Noel Picard, the St. Louis defenceman, he helped a little bit by lifting me up.”

Orr says he’s been asked to sign that photo countless times and has a painting of it in his house.

“I have a painting of it, but I don’t have it splashed all over the place, James,” joked Orr.

Hall, the man Orr scored on to win the Cup in 1970, was inducted into the Hall of Fame in 1975 after a terrific career which included winning the Calder Memorial Trophy in 1956, three Vezina Trophies and helping the Chicago Blackhawks win the Stanley Cup in 1961.

Orr says he feels bad Hall has had to talk about that goal over all these years.

“I saw Glenn one time and he said ‘is that the only goal you’ve ever scored?’ Arguably one of the best goalies ever in the game. I think 585 consecutive games without a mask, Stanley Cups, one of the best in the game and he’s got to listen about one goal. It’s just not right. That’s just wrong. Glenn was one of the greats,” said Orr. “Not only a great player, but a wonderful human being. Unfortunately, he has to answer about this one goal all the time. He was such a good goalie and there’s so many questions we could have asked him about his game.”

To make things extra special, Orr’s legendary goal was scored on Mother’s Day. The 72-year-old says his mother gave him plenty of helpful advice over the years.

“I was part of the puzzle, but we had a lot of pieces that had to come together to be the champion and we did.”

As for the COVID-19 global crisis that has brought hockey and most of the sports world to a complete halt, Orr, who was inducted into the Hall of Fame in 1979, says the NHL should only come back when it’s safe to do so.

“This is bigger than the game. This is life and death. We have to be real careful and real sure that everyone is prepared and we can’t be putting our players back out on the ice without proper conditioning,” he said. “Staying at home the way they are now, it’s pretty difficult to stay in hockey skating shape.

“There’s more important things than sports. I’m the biggest hockey fan in the world and I miss it. I miss it a lot. But we can’t be coming back too quickly.”

For his career, Orr scored 270 goals and 645 assists for 915 points over just 657 games and 10 seasons with the Bruins and Blackhawks. Orr added 26 goals and 66 assists over 74 career playoff games. His list of award​s and accolades include three Hart Trophies, two Conn Smythe Trophies, eight Norris Trophies and a pair of Stanley Cups.

Orr’s career was cut short due to a left knee injury, forcing him to retire in 1978 at age 30.