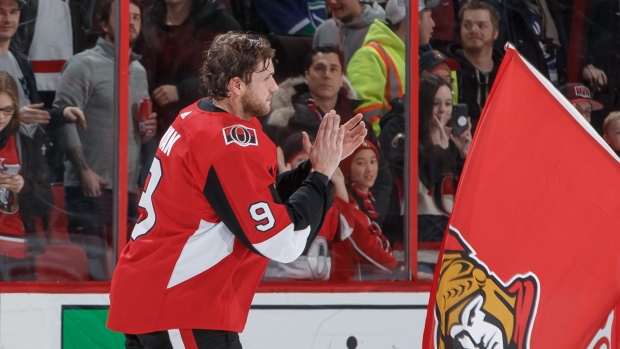 Since the 2019-20 NHL regular season is technically over, it's time to start thinking about award winners.

The Professional Hockey Writers' Association unveiled their nominees for the Bill Masterton Memorial Trophy on Tuesday, awarded annually to the player who best exemplifies the qualities of perseverance, sportsmanship and dedication to ice hockey.

Among those nominated were Bobby Ryan of the Ottawa Senators, Jay Bouwmeester of the St. Louis Blues and Oskar Lindblom of the Philadelphia Flyers.

Representing the NHL's other Canadian teams, Mark Giordano was voted the Calgary Flames nominee for the second straight year,  Connor McDavid was nominated for the Edmonton Oilers, Shea Weber for the Montreal Canadiens, Zach Hyman for the Toronto Maple Leafs, Jacob Markstrom for the Vancouver Canucks and Mark Letestu for the Winnipeg Jets.

"It's pretty special to be nominated," Giordano told the Flames website. "I took a look at the list of the past winners and it's a cool group to be a part of. You look at those guys and a lot of them have been through different things through their life and persevered. To be mentioned and nominated is awesome."