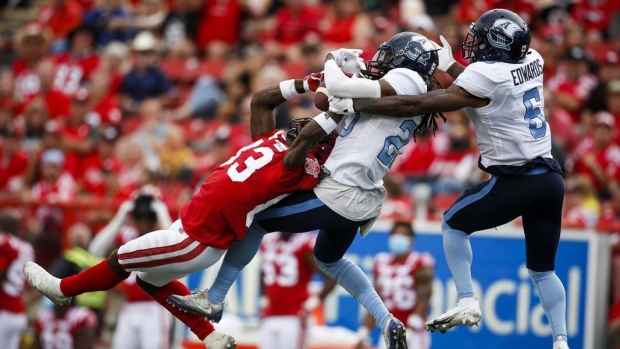 CALGARY — After recording his first CFL victory as head coach of the Toronto Argonauts, Ryan Dinwiddie praised his players for their come-from-behind effort.

“We knew it was going to be huge challenge,” said Dinwiddie, who served for four seasons as Calgary’s quarterbacks coach before being hired by the Argos. “I really thought all the guys fought together.

“I always preach family. We’ve got to stick together, take care of each other. I thought those guys, they never wavered off of that. They just kept battling, battling and battling and in the end they found a way to get it done.”

Dinwiddie replaced Corey Chamblin as Toronto’s coach after the Argonauts finished the 2019 season with a woeful 4-14 record.

With the 2020 campaign wiped out by the COVID-19 pandemic, Dinwiddie had to wait 20 months to make his debut behind Toronto’s bench and he did it in winning fashion Saturday as his Argos rallied to beat the Calgary Stampeders 23-20.

“You’ve just got to stand up in those moments,” said Richardson of the clutch catch. “When the pressure’s the most high, you should be performing your best.”

Bede finished with two field goals and a single for the Argonauts (1-0), while quarterback McLeod Bethel-Thompson threw touchdown passes to Juwan Brescacin and Kurleigh Gittens Jr.

The Argos also had a pair of two-point converts as John White IV ran for one and Eric Rogers hauled in a short toss from Bethel-Thompson, who completed 26-of-37 passes for 354 yards.

“It’s a big game, but it is just one game,” said Bethel-Thompson, adding that the Argos will now switch their focus to next Friday’s road game against the defending Grey Cup champion Winnipeg Blue Bombers. “We’ll go back on Tuesday and get better.”

Making his return to Calgary’s lineup after missing the entire 2018 regular season with a knee injury, Kamar Jorden caught a touchdown pass from Mitchell before the Stampeders quarterback hooked up with Markeith Ambles for a two-point convert.

Playing in his 10th CFL season, all with the Stampeders (0-1), Rene Paredes kicked four field goals to give him 400 for his career.

Calgary was up 17-12 heading into the fourth quarter and Mitchell wasn’t pleased that the Stamps let the game slip away in front of 23,921 fans at McMahon Stadium.

“We gift wrapped that thing,” said Mitchell, who completed 23-of-35 passes for 252 yards. “We are young and we played that way. Guys that are asked to step up didn’t step up, myself included.

The Argos opened the scoring at 7:55 of the first quarter when Brescacin hauled in a nine-yard touchdown pass from Bethel-Thompson to cap off an impressive 12-play, 94-yard drive.

Mitchell and the Stamps responded with a lengthy 17-play, 72-yard drive of their own that stalled on Toronto’s 13-yard line. Parades then kicked a 20-yard field goal to give the Stamps their first points of the game.

The Argos had a chance to build on their lead, but Bede missed a 58-yard field goal wide to the left. Sean Riley caught the ball in the end zone and ran it out to Calgary’s 31-yard line.

Mitchell then engineered a 12-play, 79-yard drive that he capped off by tossing an eight-yard TD pass to Jorden in the back of the end zone at 10:27 of the second quarter.

After the Argos went two-and-out, Calgary’s Charlie Moore blocked Bede’s punt and recovered it on Toronto’s 19-yard line. Despite the great play by the rookie linebacker and special teams player, the Stamps had to settle for a 22-yard field goal by Paredes.

Bede responded with a 54-yard field goal for the Argos before missing one — wide to the left again — from 27 yards out with no time left on the clock in the first half. Bede settled for a 40-yard single and the Argos trailed 14-12 heading into the third quarter.

Both teams had great chances to hit the scoresheet early in the second half but were thwarted by turnovers.

Ricky Collins Jr. appeared to be on his way into the end zone for a lengthy touchdown for the Argos until Calgary’s DaShaun Amos chased him down from behind and knocked the ball out of his hands.

After D.J. Killings recovered the fumble in the end zone, the Stamps started out an impressive drive of their own from their 20-yard line.

Jorden appeared to cap off that drive with a four-yard TD catch from Mitchell, but Toronto launched a successful challenge that resulted in an offensive pass interference penalty to Ambles to overturn the previous play. On third down once again, Mitchell tossed a short pass that Colton Hunchak wasn’t able to haul in at the goal line, resulting in a turnover on downs.

Paredes kicked a 15-yard field goal for the lone points scored in the third quarter before adding a 30 yarder early in the fourth to give Calgary a 20-12 lead.

After Charleston Hughes recovered a fumble by Calgary running back Ka’Deem Carey, Bethel-Thompson tossed a 37-yard touchdown pass to Gittens Jr. at 6:59 of the fourth quarter. The two-point convert catch by Rogers pulled the Argos into a 20-20 tie, which set the stage for Bede’s game-winning kick.

“I felt like we were in charge of that game, but we gave it away with some costly mistakes and they took it,” said Calgary coach Dave Dickenson. “They made all the plays in the last eight minutes and it was an unfortunate loss.”