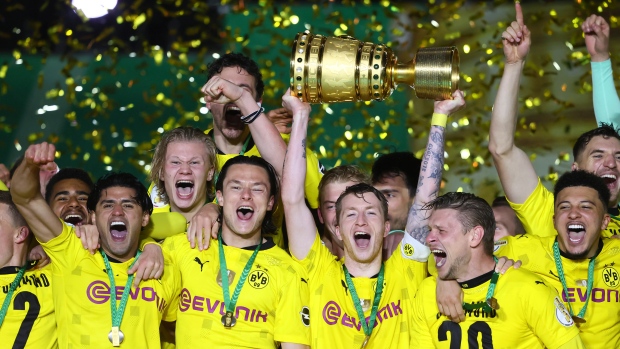 BERLIN (AP) — Erling Haaland and Jadon Sancho both scored twice as Borussia Dortmund withstood a second-half fightback in teeming rain to beat Leipzig 4-1 in the German Cup final on Thursday.

Captain Marco Reus was involved in all four goals as Dortmund won the cup for the fifth time and denied bitter rival Leipzig a first title.

Haaland was back after almost three weeks out with a muscle injury, but it was Sancho who fired Dortmund into a fifth-minute lead with a strike inside the far post

Haaland barreled past Dayot Upamecano for Dortmund’s second goal in the 28th, and Reus and Sancho combined to make it 3-0 before the break.

Leipzig emerged with intent for the second half, striking the crossbar and twice testing Roman Bürki in the Dortmund goal.

Leipzig hit the post before Dani Olmo rewarded his side’s pressure with a fine strike from outside the penalty area in the 71st.

Sancho missed a good chance in a one-on-one with Leipzig goalkeeper Peter Gulacsi, before Haaland finally sealed Dortmund's win in the 87th.

Last year’s cup final was Germany’s first to be played without fans present, and they were excluded again Thursday due to ongoing precautions against the coronavirus.