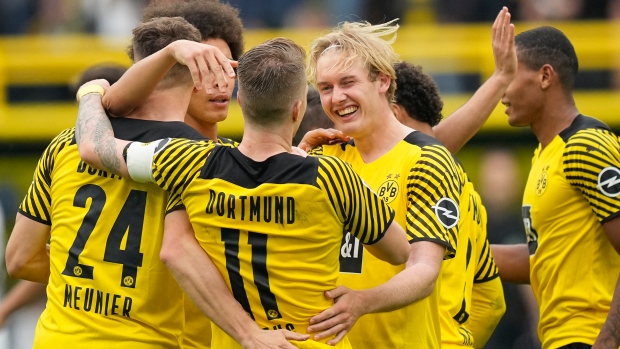 BERLIN (AP) — With Erling Haaland still injured, Borussia Dortmund needed Julian Brandt to score the winner in a 2-1 victory over Augsburg on Saturday in the Bundesliga.

Brandt filled the gap created by the Norway forward’s continued absence, grabbing Dortmund’s second goal in the 51st minute with a low shot inside the right post after Marco Reus sent the ball on.

But Dortmund again struggled going forward without the 21-year-old Haaland, who remained out with muscular problems after missing last weekend’s defeat to Borussia Mönchengladbach and the narrow win over Sporting Lisbon in the Champions League on Tuesday.

Raphaël Guerreiro opened the scoring with a penalty in the 10th minute after Augsburg captain Jeffrey Gouweleeuw raked Donyell Malen’s heel with his boot.

Dortmund went on to control the game without creating clear chances and was made to pay when Axel Witsel lost the ball in midfield and Andi Zeqiri equalized on a rebound in the 35th. Arne Maier’s initial effort from distance crashed back off the crossbar.

But Brandt came to Dortmund’s rescue, cutting inside to elude a defender and letting fly from the edge of the penalty area inside the right post.

Dortmund improved but failed to take any more of its opportunities.

American defender Joe Scally scored his first Bundesliga goal to seal a 3-1 win for Borussia Mönchengladbach at Wolfsburg, which finished with 10 men and slumped to its second straight defeat.

Freiburg claimed a 2-1 win at Hertha Berlin, which has now lost two in a row amid questions over Pál Dárdai’s future as coach.

Stuttgart enjoyed a 3-1 win against Hoffenheim.