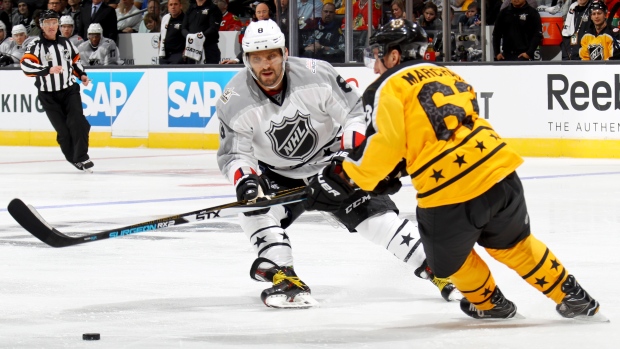 Boston Bruins forward Brad Marchand has no sympathy for the quartet of Washington Capitals who have been sidelined for their breach of National Hockey League COVID Protocol.

Alex Ovechkin, Dmitry Orlov, Evgeny Kuznetsov and Ilya Samsonov are forced to miss a minimum of four games and the team was fined $100,000 for convening together in a hotel room during a recent road trip, something that Marchand believes shows a lack of "respect."

"I think the big thing is, it’s more of a respect thing,” Marchand said. “We all want to be able to play, and there’s rules put in place for a reason. They’re not that hard to follow. We all know the consequences of breaking the rules, and we know what the rules are. So they brought that on themselves. We’ve all been told very heavily what we’re allowed to do and what we’re not allowed to do, so it is what it is on their side of things."

The 32-year-old Marchand says that what's expected of NHL players during this season is well understood and it's up to the individual players to monitor their own conduct.

“I think it just comes down to having respect for one another,” Marchand said. “You can easily hurt your team by breaking the rules and potentially getting it and having to quarantine. It’s pretty simple to follow the rules. If you get it by chance, it is what it is. It’s almost inevitable. But if you’re going to put yourself in a situation, that’s on you.”

Marchand is in his 12th NHL season. Through four games this year, Marchand has a goal and three assists.