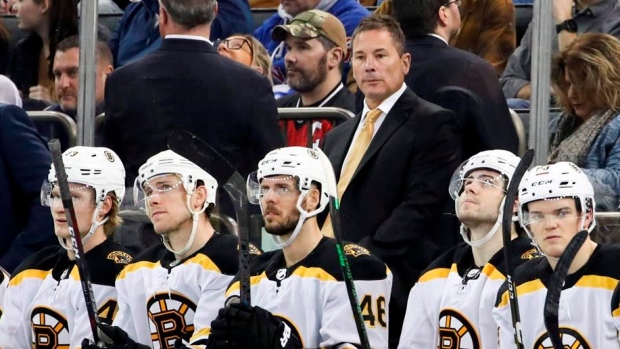 The Boston Bruins could have a different look next season if defenceman Torey Krug departs in free agency, and head coach Bruce Cassidy told The Athletic that he's already weighing his options.

Krug, who has publicly stated his desire to re-sign with the Bruins, is currently in the final season of a four-year, $21 million deal signed with the team in 2016.

The 29-year-old predominately served as the lone blueliner on the Bruins' top power-play unit this season, registering 28 points with the man advantage. Meanwhile, the team's secondary unit has featured two defencemen in Matt Grzelcyk and Charlie McAvoy. If the Bruins do lose Krug, though, Cassidy said it may not be either of the two defencemen that gets the promotion to the top group.

“Is it Grizz or Charlie? Or is it a fifth forward?” Cassidy asked. “That’s one thing I’ve been brainstorming. It’s been rattling around in my head a little bit. Not for this year. We have Torey in place. It may never be. But it’s one of those things to put in the hopper for down the road.”

Patrice Bergeron, Jake DeBrusk, Brad Marchand and David Pastrnak have featured as the four forwards on the top unit this season and Fluto Shinzawa of The Athletic believes David Krejci would be the most likely option to join the group in a five-forward setup.

The 28-year-old Krug has spent his entire career with the Bruins since joining the team out of Michigan State University in 2012. He has nine goals and 49 points in 61 games this season and sits third among Bruins defencemen in average ice time at 20:29 per game.

"For me personally, I really hope I did not play my last game as a Boston Bruin," Krug said on a conference call in April. "It's been a special place for me and my family to grow and my love for the game and playing in front of these fans, it's been very special to me."

At the time, Krug added that the two sides have not engaged on extension talks since the league went on pause on March 12.

"It's a good question, probably one that many people would like to know an answer to," Krug said. "We haven't had any talks since this thing has started. I can't speak for any other UFA that's in a position like I am, but in terms of my situation here in Boston, we haven't continued any talks or made any progress in that regard."

The Bruins currently have $63.54 million committed to 18 players towards next year's salary cap, according to CapFriendly.