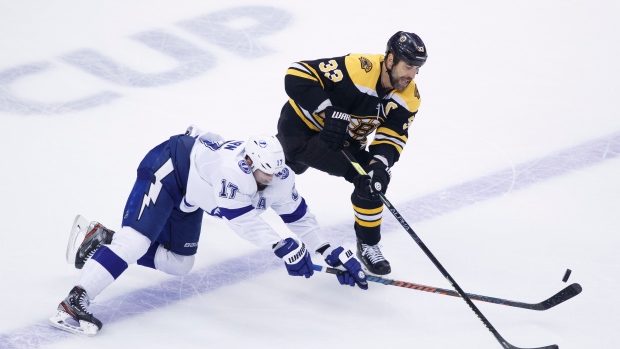 Three days after stating he was unsure on his future, Zdeno Chara said Thursday he is committed to returning to the Boston Bruins next season.

“I feel strong physically. I’m positive and feel like I can still play and contribute to this team. I want to stay in Boston. I want to be a Boston Bruin. That hasn’t changed,” Chara said a Zoom call with reporters.

Chara: "I want to stay in Boston. I want to be a Boston Bruin."

Chara says he is committed and wants to return.

Chara's 22nd NHL season came to an end on Monday night with a double-overtime loss to the Tampa Bay Lightning in the second round of the playoffs. He said after the loss that he wasn't sure what his future held.

"I haven't made that decision," Chara said when asked whether he would return next season, per NHL.com. "I obviously just finished the game and I'm going to be open-minded."

The 43-year-old defenceman had five goals and 14 points in 69 games during the regular season, adding two assists in 13 games upon the league's return to play.

Chara ranked second on the Bruins in average ice time during the regular season at 21 minutes per game, behind only Charlie McAvoy, but saw his time on ice drop to 19:46 in the Toronto bubble.

A third-round pick of the Islanders in 1996, Chara spent the first four seasons of his career in New York before being traded to the Ottawa Senators. After four years in Ottawa, Chara signed with the Bruins in 2006, winning the Norris Trophy in his first season with the team. He ranks sixth in Bruins history in games played at 1,023.

Chara, who has signed a one-year deal with the Bruins in each of the past two off-seasons, is once again scheduled to become unrestricted free agent this fall.