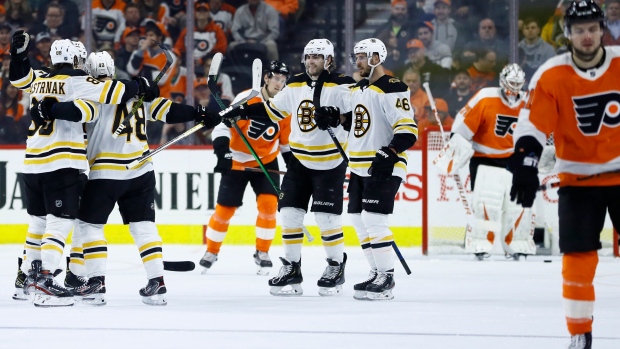 PHILADELPHIA — Scott Laughton sped down the boards, attacked the zone and had his pass set on Kevin Hayes to find an open look at Boston's net. Bruins centre Charlie Coyle acted more like a Red Sox player headed toward a triple, doing a head-first dive between the circles, his left arm outstretched with a stick that just broke up the pass and kept a game between two of the top teams in the East scoreless.

Coyle had the save of the game. Tuukka Rask took care of the rest, stopping all 36 shots he faced to help the Bruins beat Philadelphia 2-0 on Tuesday night to snap the Flyers' nine-game winning streak.

"Hayes was kind of cocked and ready there," Coyle said. "I think that's all I had, so I just went for it and the play went in my favour."

So much has gone in the Bruins' favour this season, and they cooled the hottest team in the NHL. Matt Grzelcyk and Patrice Bergeron scored and the Bruins (44-14-12) became the first team with 100 points this season. Rask picked up his 50th career shutout on his 33rd birthday and became the sixth active goalie with at least 50 shutouts. He has five this season.

"I've been around for many years. I guess if you play enough games, those milestones happen," Rask said.

Rask stymied a Flyers' offence that had scored at least three goals in each of their nine wins during the streak. They scored five goals four times since the streak started Feb. 18 against Columbus.

The Wells Fargo Center was about packed, even with concern over the coronavirus outbreak, for the most anticipated Flyers game of the season. If fans were fearful, they sure didn't show it before the game. They packed the concourse bars, lined up for $13 turkey hoagies, and accepted their giveaway Flyers caps (from rubber gloved arena workers, of course) without the gloom and doom atmosphere over the virus that has spoiled sports around the globe.

The Flyers were appreciative 19,689 fans turned out on a day on which other sporting events were cancelled or postponed.

"I don't think we really care about the coronavirus," goalie Carter Hart said. "Some other people do."

The Flyers had been sensational as they shot up the standings and were fighting with Washington for first place in the Metropolitan Division. The Flyers had defeated the Bruins in a shootout in both games of the series this season, including a bizarre ending in January when Boston's Brad Marchand overskated the puck at centre ice on a shootout attempt. Gritty poked fun at the misstep before Tuesday's game by holding a photo of an oversized red arrow pointing down at an encircled puck as Marchand looked behind him.

The frivolity didn't last for long, and the Flyers pounded Rask, taking 24 shots over the first two periods. Rask stood tall in net and got the cushion he needed late when Bergeron's shot from the circle appeared to get deflected by a Flyers stick and went in for a 2-0 lead.

"Couldn't get anything past him," Flyers coach Alain Vigneault said. "That goal that they got on their power play at the end of the second period seemed like it gave them confidence and momentum because in the third period they were the better team."

The Bruins broke through on Hart, the first goalie in NHL history under 22 with two, seven-game win streaks, late in the second. Grzelcyk buried one from the point on the power play for his fourth goal of the year and a 1-0 lead with 1:21 left in the second. At that point, the Flyers had outshot the Bruins 21-13. Also at that point, it didn't matter much to Boston.

Boston took the lead only moments after centre Coyle dove across the ice and broke up a pass to Hayes just in front Rask that kept the game scoreless. The Flyers had won at least nine straight games for the seventh time in franchise history.

"We knew the streak they were on and they are really good at home, so we had to be big in the third and luckily Tuks made good saves all night and we just tried to keep the puck moving," Grzelcyk said.

NOTES: The Wells Fargo Center said in a statement it had "strengthened our already very rigorous sanitation processes and procedures throughout the arena" and said "If you are a ticket holder that is feeling ill, or has underlying health conditions, you should consider not attending." Potential refunds or ticket exchanges for the game because of health concerns would be handled through the arena box office. ... Flyers D Philippe Myers will miss approximately four weeks with a fractured patella in his right knee.