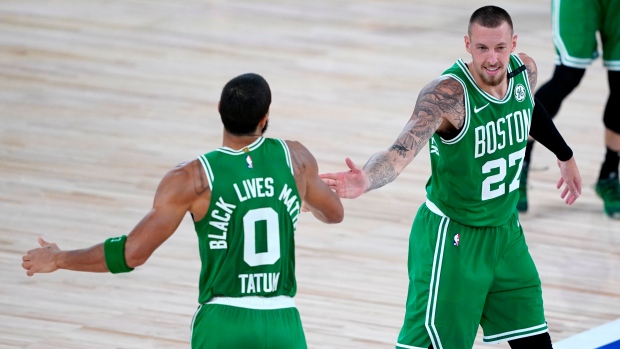 The Raptors' seven-game winning streak — and their hot start in the NBA Walt Disney World bubble — came to an abrupt halt on Friday in a 122-100 loss to the Boston Celtics, and Nurse is concerned that some of his key players haven't yet bounced back from the nearly five months off due to COVID-19.

"I'm not really concerned about some of the main guys, but there's a couple guys that need to play a little better since the restart and I'm glad we still have four games to get 'em going and give them that chance," Nurse said. "I'm not worried about their work ethic or their conditioning or some of those things, just need to get them a little more confident, have things go their way a little bit more."

There's a good chance Toronto and Boston could meet in the playoffs for the first time, and if that happens Celtics coach Brad Stevens said this blowout win will be moot.

"This game will mean nothing if we get that opportunity again," Stevens said. "They're a really good team. I thought they missed a lot of open looks and it just wasn't their night. Our guys played well, but it won't mean anything in a couple weeks."

Fred VanVleet scored 13 points to top the Raptors who trailed by as many as 40 points. Pascal Siakam, Kyle Lowry, Norm Powell and Rondae Hollis-Jefferson had 11 apiece, while Terence Davis added 10.

The Raptors starters — Lowry, VanVleet, Siakam, Marc Gasol and OG Anunoby — shot 3-for-19 from three-point range on what Powell called a "funky" night.

"One thing about this team, we always bounce back and we always stick together," Powell said. "I'm not too worried."

The Raptors (49-19) had been the class of the restart through their first three games, never trailing by more than six points (vs. the Los Angeles Lakers). But they came out uncharacteristically flat Friday, scoring just 14 points in the first quarter and trailing by 18 points in the second.

The game conjured memories of their 30-point deficit against Dallas in December. Difference was the Raptors rallied to win that game in the biggest NBA comeback in a decade.

There were no late-game heroics against Boston.

"I hate to say it, but there's nothing really I learned," Nurse said.

The Raptors defence, which had been so solid through their first three games, was a step slow all night, and when Tatum knocked down a three-pointer in front of Boston's celebrating bench with 5:26 in the third, the Celtics took a 24-point lead.

The Raptors allowed Boston to score 39 points in the third and when Walker connected from long distance with four seconds left in the third, it sent the Celtics into the fourth with a 91-57 lead.

The Raptors play the Memphis Grizzlies on Sunday in the fifth of their eight seeding-round games.

Toronto's 20-point loss to the Los Angeles Clippers in December had been its biggest defeat this season.

Powell's four points off the bench were the most by a Raptors player in a woeful first quarter that saw them trail 21-14 heading into the second.

Toronto chucked up nine three-point attempts in the second quarter, Chris Boucher's shot, late in the frame, was the only one to fall. The Raptors trailed 52-37 at halftime.

Earlier Friday, the Raptors announced that guard/forward Patrick McCaw was travelling to New York for a treatment Monday on a benign mass on the back of his left knee.

"I think we’ll have to see how the procedure goes Monday, but what the reading was as of (Thursday) night was that it's not that bad but it needs to be cleaned up just a little bit," Nurse said. "So we'll keep our fingers crossed that it goes well and it's not too extensive."

McCaw was seeing Dr. Riley Williams at the Hospital for Special Surgery.

This report by The Canadian Press was first published on August 7, 2020.