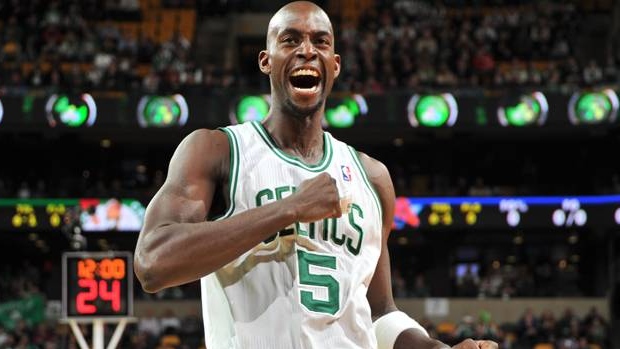 After spending the first 14-seasons of his career in Minnesota, Garnett was traded to Boston where he teamed up with fellow all-stars Paul Pierce and Ray Allen.

The power forward spent six seasons with the Celtics, winning an NBA Championship in 2008.

"I'm honored and thankful to have my number retired with the Celtics. I will always have immense respect and appreciation for ownership, Danny Ainge, Doc Rivers, my past teammates and Celtic Nation!" said Garnett in a statement.

Before the game, Doc Rivers said, “I've often said about him, he's the greatest superstar role player ever. He was a superstar, but he played his role for the team anyway, somehow. I don't know how he did that, but he did it. He changed the culture of this franchise. He really did. We needed a guy like that to come to the franchise, and he did that and it's still here. It hasn't left since. That was all Garnett."

“From the moment he arrived in the summer of 2007, Kevin changed everything for us,” said Wyc Grousbeck, Celtics Co-Owner. “His complete commitment to winning was a decisive factor in our 2008 championship. He will always be one of my very favorite Celtics.”

“Kevin gave everything he had to the Celtics in every practice, in every game, and his unique blend of energy, intelligence, and talent brought out the best in his teammates and coaches,” said Danny Ainge, Celtics President of Basketball Operations.

In his eight seasons, Garnett averaged 15.7 points, 8.3 assists and 2.7 rebounds per game.

Garnett joins Pierce, whose number was retired in 2017-18, in the Garden rafters. He is the 24th member of the Celtics organization to receive the honor.