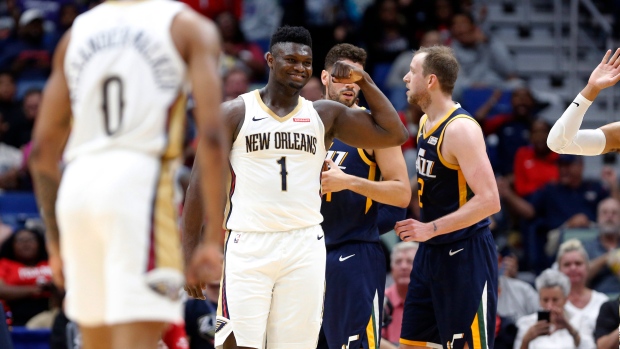 Preseason numbers often mean almost nothing. Rotations are unusual, starters rarely play much, and few if any teams are putting a premium on winning games.

As such, it's tough to glean much from exhibition stats.

But what the Boston Celtics and New Orleans rookie Zion Williamson — the No. 1 pick in this year's draft — have been doing so far in the preseason certainly stands out.

The Celtics are 3-0 after beating Cleveland on Sunday — and have put together a huge run in all three of those games. The latest was a 50-17 spurt against the Cavaliers, a game that was close for most of the first quarter before Boston built what eventually became a 54-point lead.

Boston's other big runs of note in this preseason were a 41-17 stretch last Sunday against Charlotte, and opening the game with a 29-4 burst at Orlando on Friday. On top of the 50-17 run against the Cavs, they added a 26-8 run in the fourth quarter as well.

No matter who the Celtics have on the court, defence has been the constant. Boston is holding opponents to 36.5% shooting through the first three exhibitions, 25.7% from 3-point range.

"That's a tied-together group on that end of the court," Celtics coach Brad Stevens said.

And while 7-foot-6 centre Tacko Fall has quickly become a fan favourite in Boston — yes, Stevens is aware of the chants where fans are clamouring for him to play more — the numbers are worth noting as well.

"Everyone is flying under the radar," Stevens said Sunday. "Except Tacko."

When it comes to New Orleans, Williamson isn't flying under anything.

The Pelicans are 4-0 in the preseason after winning in San Antonio on Sunday, with Williamson finishing with 22 points and 10 rebounds. He's shot 29 for 36 from the floor in his last three games, and is averaging 23.3 points and 6.5 rebounds on 71% shooting — all in about 27 minutes per game.

Kemba Walker returned from a one-game absence with knee soreness and scored 12 points in 15 1/2 minutes, going 3 for 3 from 3-point range. The Celtics held the Cavaliers to 33% shooting, 18% on 3-point tries, and forced 29 turnovers.

Jrue Holiday scored 16 for the Pelicans, who overcame a 17-point deficit.

Bryn Forbes scored 18 and DeMar DeRozan added 16 for the Spurs, who held out LaMarcus Aldridge and Rudy Gay. The Pelicans gave J.J. Redick the day off for rest.

Kawhi Leonard and Rodney McGruder sat out for the Los Angeles Clippers, who got 22 points from Montrezl Harrell and 16 points from Lou Williams.

Reigning league MVP Giannis Antetokounmpo (illness) did not play for the Bucks (4-0).

Zach LaVine hit four 3-pointers and finished with 26 points and Lauri Markkanen had 15 points and 13 rebounds for Chicago.

Karl-Anthony Towns and Andrew Wiggins added nine points each in 11 and 12 minutes, respectively, for the Timberwolves (1-2).

James Young, a first-round pick by the Boston Celtics in 2014, led Maccabi Haifa with 20 points.