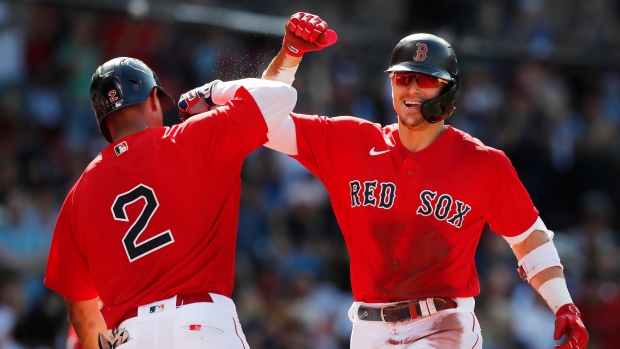 As Germán walked off the mound then with a no-hitter intact and a solid lead, there was no way to envision what was on deck.

Held hitless into the eighth by Germán and looking feeble, Alex Verdugo and the Red Sox suddenly erupted for five runs to shake Fenway Park and storm past New York 5-4 on Sunday.

The old ballpark was almost silent all afternoon until Verdugo opened the eighth with a long double for Boston’s first hit, and he raised his arms in celebration at second base.

By the time Kiké Hernández slid home headfirst on Bogaerts’ sacrifice fly with the go-ahead run to cap the rally, fans were in a frenzy.

“I felt like just getting that hit out of the way had everybody just take that big deep breath, didn’t have to worry about getting no-hit anymore,” Verdugo said. “That inning was crazy. From going no-hit to seven innings, to putting five up in the eighth, that’s one of the craziest comebacks I’ve ever been a part of.”

With their major-league leading 32nd come-from-behind victory, the Red Sox reclaimed first place in the AL East, a game ahead of Tampa Bay. It was their 10th win in 13 games this year against their rivals, and erased a tough 4-3 loss on Saturday when New York scored four times in the eighth.

What a difference a few hits made. Before those, Red Sox manger Alex Cora, it was pretty glum in the Boston dugout.

“Not great, to be honest with you,” Cora said. “Whoever says, ‘we’re a hit away or a baserunner away from getting this going' ... I didn’t sense that. I sensed a lot of frustrated people. (Germán) was amazing.”

The Yankees, meanwhile, absorbed another brutal loss in a season full of them. They dropped three of four in the series and fell nine games behind Boston.

“Really tough one, obviously. Domingo was terrific," Yankees manager Aaron Boone said. "It's a tough one we've got to get past. Another extremely tough one.”

Boston trailed 4-0 when Verdugo doubled to deep right, and Germán was lifted after the hit by Boone.

"You know to pitch a no-hitter is one of the hardest things to do in baseball,” Germán said through a translator. “I knew I had a no-hitter going. I was executing pitches to try and be as careful as possible. Verdugo was able to connect there. I thought it was a good pitch.”

Jonathan Loaisiga (7-4) relieved, and Boston broke loose with four straight hits. Hunter Renfroe had an RBI double, Christian Vázquez singled home a run and Hernández followed with an RBI double, cutting it to 4-3.

“It’s a bad day for me. It’s tough,” Loaisiga said through a translator. “It hurts because you had the starter pitching strong. You come into the game hoping to do your job and it doesn’t work out.”

Germán was trying for the first no-hitter by an opponent at Fenway since Detroit's Jim Bunning in 1958, when he retired fellow future Hall of Famer Ted Williams on a fly for the final out.

Mixing his well-spotted fastball in the mid-90 mph range with a changeup and curveball, the 28-year-old Germán struck out 10 and walked just one.

With a 3-0 lead, he began the seventh by fanning Duran. Bogaerts also struck out, swinging at a passed ball that prolonged the inning. Germán struck out Devers and Martinez, with four all strikeouts coming on third-strike swings.

There have been seven no-hitters in the majors this year, one short of the big-league record set in 1884, the first season that overhand pitching was allowed.

There were two near-misses on Saturday night: Patrick Sandoval of the Angels got his bid broken up with one out in the ninth at Minnesota, and Framber Valdez and the Houston bullpen took a try into the eighth.

Brandon Workman (1-2) earned the win and Matt Barnes got the final three outs for his 21st save.

“It was a pretty special comeback,” Hernández said.

Rougned Odor had a solo homer and RBI single for New York. He popped up with a runner on second to end it.

Yankees infielder Gio Urshela, activated from the COVID-19 injured list before the game, had an RBI single to make it 2-0 in the fourth after Gleyber Torres doubled and advanced on a sacrifice.

Odor’s bloop, run-scoring single had made it 1-0 in the third.

Yankees: To make room for Urshela, they placed INF Chris Gittens on the 10-day injured list, a day after he stepped on his bat running out of the box and sprained his right ankle. … The Yankees’ lineup was bolstered not only by the return of Urshlea, but also catcher Gary Sánchez, sidelined Saturday with mid-back spasms. Slugger Aaron Judge and catcher Kyle Higashioka, both on the COVID-19 IL, are expected to return to the lineup this week.

Yankees: Off Monday before opening a three-game series on the road against Tampa Bay starting Tuesday.