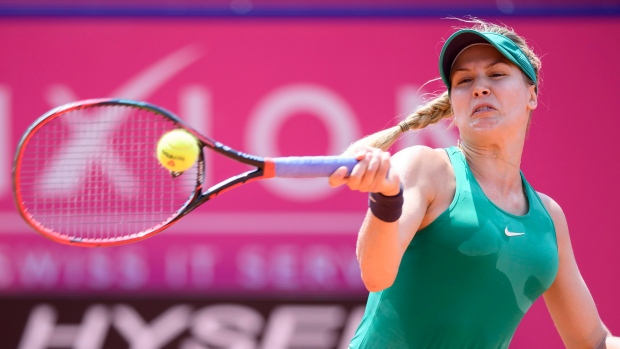 GSTAAD, Switzerland — Canada's Eugenie Bouchard enjoyed good news on and off the court on Friday.

Minutes after beating Russian qualifier Veronika Kudermetova 7-5, 6-0 in the quarterfinals of the Swiss Open tennis tournament, Tennis Canada announced that Bouchard will receive a wild card for the Rogers Cup next month in Montreal.

The showing in Switzerland marks Bouchard's first trip to a semifinal since January 2017 when the native of Westmount, Que., reached the final four at a tournament in Sydney.

"I'm happy I get to play another match," the 24-year-old Bouchard told reporters. "I'm not really comparing or thinking about the past like you guys always like to bring up. I have a match (Saturday) and that's great."

Bouchard closed out the match by winning the last eight games and 10 of the last 11. She started off her dominant second set by winning 13 consecutive points.

"It was very important for me to realize that even if she hit some big shots, I can hit big shots too," she said. "I had to just counter well and take advantage and I did that much better in the second (set)."

Bouchard will face top seed Alize Cornet of France in the semis. Cornet, ranked 48th in the world, beat No. 5 seed Samantha Stosur of Australia 6-4, 7-6 (5) on Friday.

The Canadian is looking to win a WTA Tour event for just the second time. Her first victory came in 2014 in Nurnberg, Germany.

The wild card for the Montreal event didn't appear to be a sure thing for Bouchard a few months ago as she nearly tumbled out of the top 200.

But the former world No. 5 has had a bit of a bounce-back in recent weeks. Bouchard won three qualifying matches to advance to the main draw at Wimbledon, where she reached the second round.

Bouchard's ranking is now No. 146, second amongst Canadians.

"Eugenie is currently showing great things and we hope that she can keep her momentum going in Montreal,” Rogers Cup tournament director Eugene Lapierre said in a statement.

Tennis Canada said Bouchard will play her opening match during the first day session of the Rogers Cup on Aug. 6, unless she is matched up against a player who reaches a final at a tournament the previous week.

Two more wild cards will be given to Canadians before the tournament.